He's been out of work for months, but still dresses for
the office and kisses his wife goodbye, and heads for
his park bench.

Every morning briefcase in hand, just can't seem to
tell her, inside he's no longer a man.

He looks through the paper convinced that nobody wants
him hands to his side in surrender, chest caved in.

His eyes half open, not tired, but not awake, and he
spends his days hoping for an end to the headache.

and he writes it all down, about everything and nothing
talks about his kids, and how he wants to leave 'em
something.

He's got a thing for pain, and blocks it all with his
heart, and to keep from going insane, he puts it all in his art.

But he just can't seem to put it all together tries to
think of the ways that it could all be better.

His family and his life no longer compel him he talks
to himself, and says: you gotta swim.

He's tired of the sickness and begs for the insulin.

Tries to keep above water, prays for the will to win.

He wants to be a good father, but he knows that he's
not one, and dreams of eating a barrel full of death by
shotgun. 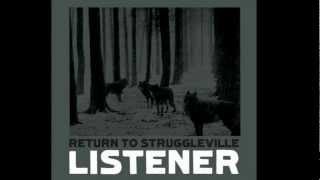 check amazon for Death By Shotgun mp3 download
these lyrics are submitted by kaan
browse other artists under L:L2L3L4L5L6L7L8
Record Label(s): 2009 Listener
Official lyrics by