The Jump Off Lyrics

The Jump Off Lyrics

[Verse 1: Lil' Kim (Mr. Cheeks)]
I been gone for a minute now I'm back at the jump off (Jump off)
Goons in the club incase somethin jumps off
And back up before the hive let the pump off
In the graveyard is where you get dumped off
All we wanna do is party (Woo!)
And buy everybody at the bar Bacardi (Woo!)
Black Barbie dressed in Bulgari
I'm tryin to leave in somebody's Ferrari
Spread love that's what a real mob do
Keep it gangsta look out for her people (For her people)
I'm the wicked bitch of the east, you better keep the peace (Aiyyo!)
Or out come the beast
We the best still there's room for improvement
Our presence is felt like a Black Panther movement
Seven quarter to eights back to back with 'em (Back to back)
And I'm sittin on chrome seven times platinum

[Chorus: Lil' Kim & Mr. Cheeks]
This is for my peeps, with the Bentleys, the Hummers, the Benz
Escalades twenty three inch rims (Oh!)
Jumpin out the Jaguar with the Tims, keep your bread up
And live good, East coast West coast worldwide
All my playas in the hood stay fly
And if your ballin let me hear you say right (Right)

[Verse 2: Lil' Kim (Mr. Cheeks)]
It's Lil' Kim and Timbaland niggas shit ya drawers (Come on)
Special delivery for you and yours (Now)
I rep for bitches he rep for boys (Uh ha)
If you rep for your hood then make some noise
I got my eye on the guy in the Woolrich coat
Don't he know Queen Bee got the ill deep throat?
Uh! Let me show you what I'm all about
How I make a Sprite can disappear in my mouth....HO!!!!
Shake up the dice, throw down your ice (What)
Bet it all playa f**k the price
Money ain't a thing throw it out like rice
Been around the world cop the same thing twice
Rub on my tits (Huh!) squeeze on my ass (Oooh!)
Gimme some UH!!! step on the gas (Ah)
Pop the cork and roll up the hash (Roll it!)
You know what we about, sex, drugs and cash

[Verse 3: Lil' Kim (Mr. Cheeks)]
Enter the world of the Playboy pin up girl
Buttnaked dressed in nothin but pearls
You wanna meet me cause ya, know I'm freaky
And ya, wanna eat me cause ya, say I'm sexy
Got a man in Japan and a dude in Tahiti
Believe me sweety I got enough to feed the needy
No need to be greedy I got mad friends that's pretty (Hey!)
Chicks by the layers (And) all different flavors (Woo!)
Mafioso that's how this thing go (Yeah)
Now everybody come get with the lingo
Shake your body body, move your body body (Body body)
On the dancefloor don't hurt nobody body (Body body)
I'm the one that put the Range in the Rover
When I'm steppin out the Range yo it's over
Comin through in the Brooklyn Mint gear
We 'gone do this just like Big Poppa was here

[Outro: Mr. Cheeks]
Yeah, to the what, yeah, oh, yo, keep your bread up, yeah, and worldwide
And stay fly nigga, yeah man, right right right right, Queen Bee, LB
Two thousand and, f**kin three, why not? we makin it hot
She back at it, why wouldn't she be? come on, yeah
B.I.G. Freaky Tah, yeah yeah yeah, L's, light 'em, oh... 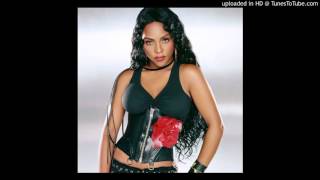