Say they let me in the club, through the back, with the strap
All these strippers on my dick because a youngin' got them racks
Hell yeah, I move the pack
Hell yeah, I keep a gat
Hell nah, I won't snitch
And I prolly f*cked your bitch
And they know I keep it cool
But they know that I switch
And they know I'm M.O.B
Put my money over chicks
Niggas got them hands out, so I told 'em "suck a dick"
I can never get extorted, bitch I'm dying for this shit
In the field, put my life all in them lines for them shit
Niggas claimin' that they real, but be lying in this shit
I be getting to the guap, got no time for a bitch
Is you f*ckin' me or not?
My favourite line for a bitch
My young nigga savage, my gun automatic
If you want the static, it's free, you can have it
Please do not get me confused with this rappin'
This sum cleaning you know what's happening
I came home from trappin', all of my hittas they slow
All of my hittas on gold, keep them a rachet
And I ain't talkin about hoes
Pull up and pop at the shows
Let me find out where you hiding now, then we slide now
Used to tote them.38s, its 50 shots.45s now
Used to shoot them hoops, we shootin' pistols, niggas die now
Snub nose, 5 shots it's drums in them 9's now

Say they wonder how I'm bleeding, disrespect I leave 'em
Partner hating on me, I say "f*ck 'em, I don't need 'em" She wanna f*ck on a demon, she wanna swallow my semen
She wanna chill with the gang now, she might just let the whole team in
Leave the bitch feenin', she might just never see me again
And I just gave my lil' brother a bar, he the lord that he free again
Free the gorillas but keep all the rats
I love all my killers, I give em the gas
She acting boujee, get hit from the back
Now back to the money, bitch get out the trap

Bitch I'm Fendi rocker, Chiraq pistol popper
Bitch I'm with the drama, 100 clip off in that chopper
Watching for the anacondas
No revolver, we not ducking problems
Bitch I'm with the shit, see my opps then we gon' hit
Never went out like a bitch
Yolo, hop out the whip and I'm dolo
No of these niggas want no smoke
My hittas loco
We get that pipe out of bolo
We get hit with the four four
That's how we coming, catch me with all of my youngins
Every car got like a hunnid, lil' niggas gunnin'
You wanna get into sum, like Andre, my little niggas drummin' 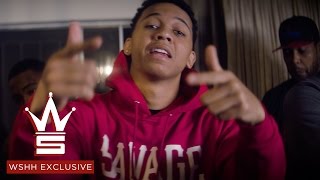