Watch What You're Doing Lyrics

Watch What You're Doing Lyrics


Mama killed a chicken, thought it was a duck
Put him on the table with his feet sticking up
Papa broke his glasses when he fell down drunk
Tried to drown the kitty cat, turned out to be a skunk

Little joe billy went fishing for trout
Played hooky from school until the cops found out
Didn't have a father, was an only child
His mama never beat him, so he grew up wild

I knew a girl, sweet as can be
But she fell for a man like a chain saw a tree
She listen to his lies, fooled by his charms
Now she's sitting with a baby in her arms Well everything's fine, until things get bad
Then you sit around thinking about the good times you
had
Well it ain't no good to live a life of sin
If you don't shape up, you know you'll never get in

Some folks smile, they seem all right,
But you find out later they were an angel of light
Try to love everybody, but don't be blind
Because some kind of people try to mess your mind

Some folks say that the good lord is dead
That he doesn't exists, he's inside your head
I wonder how many gonna be surprised
When they look straight up
And see him coming through the skies 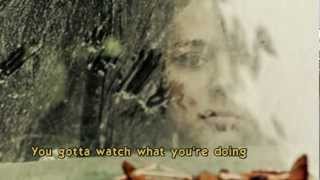 check amazon for Watch What You're Doing mp3 download
these lyrics are submitted by kaan
browse other artists under L:L2L3L4L5L6L7L8
Record Label(s): 2009 Solid Rock
Official lyrics by