My Grand-pops was a man of respect, had to sweat

Just to cash checks working from sun-rise to set

Every day he'd get challenged, no trades or talents

Barely scraped by, he found faith to balance the straight line

And pace feeling worn and grey

Poor with four seeds, one more on the way

It was hard days indeed all work and no play

He made sure things on the surface were okay, but

Something disturbin' within his mind was lurkin'

Was urging him to listen to the train in the distance

At first it wasn't intense, just one little instance

Sure, it didn't occur, he turned to resist it

With time people noticed he was actin berserk

Granny got a call saying he was absent from work

And that was a first

She ran to the pastor at church

To ask him what was up with this disastrous curse

But bad went to worse

He came back three days after, no money in his wallet and his shirt on backwards

Stumbling, walked awkward he called out for his daughter

Be sure this seed is sown deep down into his dome, don't ever ever walk to the train tracks alone"

With that he backed up reached out for his jacket

Told her not to act up and cracked up laughin'

After all that happened he left never to be seen

Fifteen years later is when my mother had me

Went from a, family man to rambling man

A gambling man that burned both ends of the candle

Folded his hand in it was too hot to handle

When I was a tot my mom dropped fables and stories

To warn me of the dangers that were layin before me

To keep it interestin' she would hide the lesson

To guide my direction, provide the right message

In time I developed a sense of her embellishment

Since I was rebellious against what she was tellin me

I defended the place. Yo and that was the case

Slurred speech drippin' off of my face

Not the average things you see on acid;

My granddad bloody hovering on a speaker cabinet

Laughing in a raspy tone, covered in maggots

That snacked on his mass of a bone, I couldn't grasp it

Did a double dismount off of the couch, flipped out Broke the closest window I found, then I dipped out

Suddenly, I discovered little voices mumbling up in my head

It had me wondering what was it my mother said

Back when I was younger it had my brain ragged

As I stumbled off of the night towards the train tracks

So there I was, stalking through the dark with a buzz

It's like a shark had to keep movin' it's that or be ruined;

If I sat still I was doomed and that wasn't doin'

So I marched through the park slow goin' like Donnie Darko

The night seemed more serene than a morphine fiend in a morgue, it seemed

Like I lost it, that was when my grand-pops carcass emerged from the dark

Gurggling his words of carnage, but he couldn't talk

Something about the birth of sadness

I scurried off, I was on the verge of madness

Came to a slope to a steep, beggin' for sleep

As I climbed up taking my focus off of the creeps

The train tracks were wet, I saw a shiny grin from afar like it was happy

"It's a nice night for a walk, would ya mind if I joined you?"

"Do what you wanna do"

What a young dude like you's doin out by the tracks? *You waiting on a traaain*"

"I'm mindin' my business so maybe you should do the same

I just been a witness to something sick and sadistic

So twistedly disgusting you should feel real lucky you missed it. "

"Ooh easy with the tongue son, try to listen carefully

What you seen's scary but nothing can compared to me

I could show you things that paint all your dreams haunted

Or I could make you scream if I wanted

Or I can be the bee in your bonnet, your best-friend forever

Two peas in a pod flocking like birds of a feather

And you never have a need to beg work or steal

If all this sounds worth it then lets make a deal

All you want in life for price of your soul

All the money you can fold, power that you can hold

I'll put you in control, only if you're down to roll down these train tracks tonight. "

"But where we gonna go?" 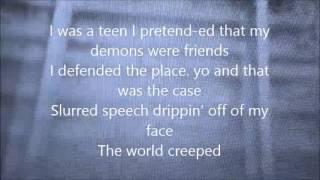 check amazon for Devils Train mp3 download
these lyrics are submitted by BURKUL6
these lyrics are last corrected by unknown on May 29, 2017
browse other artists under L:L2L3L4L5L6L7L8
Songwriter(s): WARNER KELLY MCKEE, BROWN BRIAN