[Verse One: Trendi MC]
My dad
Made a complaint
Somebody left a doo doo bar in the toilet bowl
He was frustrated, mad
So I thought he wanted me to investigate
So I did
And I found out
That nobody did it in the house
I thought maybe
It was the government
Or it was the Invisible Man

[Sharlock Poems]
Leak ink on thin sheets of red wood
The smell of defeat, it sniff good
Never said I could or couldn't do something I wasn't sure of
Brothers hating on my woman talking 'bout she asked for [?]
With the shrug of the shoulders to answer questions from the first lady
Why do you write rhymes about gun, thugs and pimping ladies?
Represent us like you was the reason why they underpay me
And it's true
32 tracks about pimping from the beginning until it's through
Makes me want to hate, despise, heat seek and destroy you
No time for repeats in hip hop you must bring something new
Brothers still talking 'bout they coming clean like Jeru
Peace to that, I'm coming clean like Comet
With the power to clean up vomit
Christian not Islamic
[?] display window I bought my gun a blue bonnet
To protect her ears and brain waves from the teachings of you false prophets

[Trendi MC]
Dirt's pretty dope you can build from it
You can grow plants and different things from it
Sit a building on top of the ground of it
Executives be like, "Yo, man that's fresh."
Be a home for bugs and reptiles running
At home and stuff eating, having fun and
It can contain a planters core and stuff of it
It can hurt your eye if it's in it, don't rub it

[Verse Two: Sharlock Poems]
30-16-10, three digit combo that secures my rhyme flow
Carbohydrates give me energy
'98 Til Infinity
Who's that peeking in my window?
Reality, too many MC's rhyming for a salary
Over the hill, under the bridge, head first into Calvary
It's Sharlock Poems the MC

[Trendi MC]
I broke my leg and called Dr. Dre
Made an appointment, he said, "Coolio"
Went down, there was a secretary named Mich'elle
She gave me a lollipop, flavor alligator souffle
J. Christ came in wore beanie hair, long wavy
Fresh Adidas outfit sandals of today
Some people thought He was there to player hate
Some ghetto girls was just trying to evaluate
Voodoo! came in to deliver a spleen
He dressed Ras Kassual, shirt color was Mean Green
Went for an X-Ray for my leg like a fiend
Got nervous Madonna said, "Calm down, strike a pose"
All crying, Puff Daddy brought tissue for my nose
He said, "Don't be a Bad Boy." You know how it goes
Doctor fixed my leg, well it was like a dream
Put a cast on my leg and said, "Yo, keep it clean." 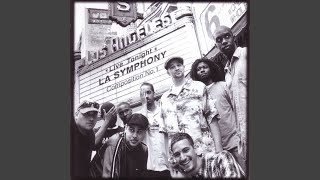