Yo! Check..check y'all, one two three
And I won't bother you if you don't me
I'm rapping up the rhyme like a smooth poetry
With the funk in the tounge, Asian punk will get you
stung like a bee
I started with a loop, then a shoop,damn I'll shoot
With hip hop,I pump up, pump up I'll never stop
It 's time to get rough gov. had enough of sucking up
To the big fat bum, listen up here I come
Dickie dickie ho....Dickie dickie dickie ho (2x)
Never can stand of the damn man hypocrite
Heck tried to be nice though we hated it
Yeah we're KRUising down now and we're up with a roar
It's time to hardcore time to level the score
Ain't no rebellious act, just trying to straight out
the fact
Had enough of the crap and hommies don't take that
Enuff ezz enuff....ezz ezz enuff (3x)
Enuff ezz enuff ezz enuff ezz enuff
(Are we gonna get some seriousrapping in here)
Yo! I'm loadded up son with the second episode
So try to take note what I quote, vote
Power to the people and full democracy
Nobody can decide what I can hear or see
I'm rapping up hard, yeah I admit it baby
Ain't down with the clowing around, soft and sissy
Try to make a buck, fooling all the kiddies
Maximum disgrace to the Rappers society
Back to the subject, hip hop and new jack
Another day, another rapper, another concept So what? You can call it what you want it to be
But stop shooting me down, we're all the same you see
Brothers and sisters, shaking to the boogie woogie
Ain't taking no more bull, yeah that's right baby
Ooh Gee...Ain't down with that bad mouth crap
Coz enuff ezz enuf and homies don't take that
Enuff ezz enuff....ezz ezz enuff (3x)
Enuff ezz enuff ezz enuff ezz enuff
Run, run unless you dare to confront
Next on the hit list I'm never missed
Hit between the eyes with a real hard core
But I soon show them how its done
I'm a straight hype rapper ain't like no other
Ain't doing drug no booze without a doubt
Never make a verdict just by the way a buddy look
But I'm booked and cooked like a crook uhhhhh....
Ram with a bang with the Asian punks
When I'm kicking out the strength and a wham bam thank
you maam
The final check on the mic, mack
Cause enough is enough and hommies don't take that
Enuff ezz enuff....ezz ezz enuff (3x)
Enuff ezz enuff ezz enuff ezz enuff
Ohh yeah... This one is dedicated to the hardcore rap
brothers and sisters who's been hanging tough when the
time is hard
You know what I'm saying
A special shout for you all for sticking together
And let's hope we get more respect
The respect that we deserve....peace.
Explain lyrics
Correct lyrics 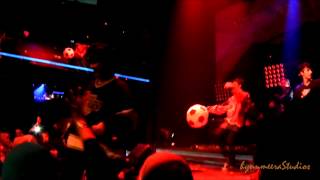