One, two, three, the crew is called B.D.P.
And if you want to go to the tip top
Stop the violence in hip-hop, Y O

Time and time again, as I pick up the pen
As my thoughts emerge, these are those words
I glance at the paper to know what's going on
Someone's doing wrong, the story goes on
Mary Lue's had a baby someone else decapitated
The drama of the world shouldn't keep us so frustrated
I look, but it doesn't coincide with my books
Social studies when I speak upon political crooks
It's just the presidents, and all the money they spent
All the things they invent and how the house is so immaculate

They paid missiles, my family's eating gristle
Then they get upset when the press blows the whistle
Of course the main profiles are kept low
You temper with some jobs, now the press is controlled
Not only newspapers, but every single station
You only get to hear the president is on vacation
But ehrm, stay calm, there's no need for alarm
You say go back to your mom, and you're off to Vietnam
You shoot to kill, come back and you're a veteran

But how many veterans are out there pedaling?
There's no telling, 'cause they continue selling
As quiet as it's kept, I won't go into depth
You can talk about Nigeria, people used to laugh at ya
Now I take a look, I say U.S.A. for Africa?

B.D.P. posse I say "One two three, the crew is called B.D.P.
And if you wanna go to the tip top
Stop the violence in the hip-hop, Y O" This might sound a little strange to you
Well here's the reason I came to you
We gotta put our heads together, and stop the violence
'Cause real bad boys move in silence
When you're in a club, you come to chill out
Not watch someones blood just spill out
That's what these other people want to see
Another race fight endlessly
You know we're being watched, you know we're being seen

I say, "One two three, the crew is called B.D.P.
And if you wanna go to the tip top
Stop the violence in the hip-hop, Y O"

B.D.P. and me we step into the party top celebrity
Say when we're coming to dance, we never have to pay a fee
'Cause that's where we got R E S P E C T
I have this one wife, her name is Miss Melody
I know I'm from the Bronx, she from the Brooklyn posse
I tell ya look a little like this, then I tell you some that I
Sometimes I got my gear on, sometimes I wear a hat
Sometimes I'm in a Mercedes and sometimes I'm in a plane
Sometimes I find myself upon the number two train

One, two, three, the crew is called B.D.P.
And if you wanna go to the tip top
stop the violence in the hip-hop, Y O
Explain lyrics
Correct lyrics 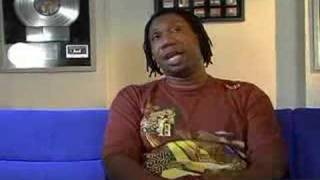