Bring It Back Lyrics

Bring It Back Lyrics

I rock slow and easy like soul
The New York flow, is strictly for the pro
Hip-hop! Ladies and gents
So you can know, every word yo, of the sentence
Hey la, like De La, I got Common Sense
Save the compliments for after I commence
to evidence of MC's, rockin under false pretense
Yes they get burned like incense
Myrrh and frankencense, you know the consequence
When you rock with KRS and don't make sense
Kris represents all MC's, that rock with ease
I'm not conceited, I got confidence in my abilities
Agility's my credibility
Oratorical artillery in all facilities
It Takes a Village like Hillary
when killin me, KRS has wide range capabilities
On the microphone, in the combat zone
MC's get eaten like the ozone layer
Hey ya, I'm not a playa I'm a teacher
But if I wanted your girl
You'd be Living Single like Latifah
Action Uptown like Monifah
I hit like a beeper, and hot like the bunny on Easter
Lyrically let me freak ya
With moves like Scoob and Scrap
Rock Stready, Stretch, Al and Kiko
I warm up any room like a heater
Bringin a New Balance to the speaker like a sneaker
Still a teacher, prove it, like medicine squared
This Garden of Eden, keeps the party movin

I'm interested in skill and how we build as a culture
I don't eat off old material like a vulture
Repeatin myself for wealth is bad for my health
Everyday I express myself with a dope lyric
From my inner spirit, then I share it with others
As they hear me, enhancin
East and West, overseas, brothers and sisters
Sons and daughters transcended all borders
I deal with mind expansion
Anytime you aimlessly dancin, and romancin
It's your life that you be chancin
Not that I wanna sound gloomy But I don't rhyme about Judy Judy, cutie and shake your booty
When you gonna grow up and be GOD?
Instead of making a rap a full time job
Yeah, it's a job and not an art
They only rhyme to get money;
cause true self-expression takes heart, and guts
Rhymes, and cuts
Tight minds and not tight butts
Reach your goal, like a puck
I wish you good skill and not good luck
Cause only skills put you up out the gutter so I utter

That old New York flow means wrote for fun
And if the money come, THEN THE MONEY COME
But today and everyday, KRS speaks the truth
We dealing with unemployment in the city black youth
usin rap, to put clothes on they back
No culture, or disciplined, way to act
But soon yo, we'll take care of alla that
We're huntin fi de power help supress people tracks
That keep the culture intact, and soon you will see
In the black community, black unity
Not black nudity, after black puberty
For every crew to see, to breakin down the black community
The only one to blame is you and me
For not takin responsiblity for our artillery
Verbally, you heard of me, Knowledge Reigns Supreme
Over Nubians Everywhere, I kick it cause I care
The end isn't near, it's way over there
BLAOW! The only reality is now
But when I say bring back the old flava
That means bring back the ORIGINAL MC behavior

Now I got to show you how the BX rocks
MC's, are jumpin out shoes and socks
Body body rock body body rock
I'm the king of rock'n'roll, ahh yeah
Throw your guns in the air! Glocks down
Who the hell is, pagin me at 5 o'clock in the mornin
Where you gonna be, because...
Fresh is the word, many money missin many
Jenifa, oh Jenny
We make up all these rhymes inside our head!
Yo, let's connect politic ditto
Explain lyrics
Correct lyrics 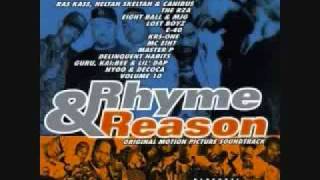 check amazon for Bring It Back mp3 download
browse other artists under K:K2K3K4K5K6
Songwriter(s): Greg Gordon