Like other music rap is an art
And if you wanna get the feeling, got to feel it in your heart
You need brain power, dictation
Vocabulary, articulation
Creativity and originality
Execution of a feud formality
Versatility and a voice that's loud
With the ability to take a crowd
To it's apogee, and always has a
Feeling like you're havin a mental orgasm
Makin all minds come to one conclusion
You are the best and it's not an illusion

For instance
If this record was an atom, I'd be the nucleus
The center of attention, kool moe dee and I'm just
Like the core of an apple, the priest of the chapel
With the mic in my hand I'm like a surgeon with a scalpel
Ready to operate the rhymes that I create
Sounds like music to your ears cause I can combinate
Bass and treble to create a level
Of highs and lows of sounds that goes
With syncopated concrete-created
Beats that meet the standard of a street credit
Gotta critique a rhyme if it's weak
You won't wanna speak if your rhymes not peak
With verbs and nouns and adjectives
Combined to make a phrase
That'll play with a beat
Stop and start, slow it down at a part
And totally amaze
The whole crowd, leave em in a state of awe
Cause I'm as perfect as a diamond without a flaw
And yes, I'm legendary, also very, very
Educated, proficient and extraordinary
In my field the other rappers yield
A knight in shining armor and the mic is my shield
In rap I'm vital, the other rappers' idol
The best mc and moe dee's my title
But you can call me kool

Now when I rock instead of Just average I'm better
Than the average man
And that's why I can
Make a real human feel like a manakin
I mean I'm cold heart? from the time I walk in
I'll shock ya and amaze ya
Hit ya, then I'll daze ya
Either way I'm gonna phase ya
Cause I'm sharp as a razor
When I'm rhymin to the cut
You know what?
I'm the best mc
Many imitate me
They never would admit it
They just can't get it
I rhyme like the rest
But the juice I possess
Always seems to be more
I'm a rhyme connoisseur
My taste for the beat
Is also elite
I'm the best hip-hopper from off the street
Cause when I'm rhymin on the mic I always take control
Can't another rapper touch me with a 10 ft. pole

I rhyme a 100 miles an hour
With lightning-speedin power
Make the sweetest of the sweet mc's look sour
Timber as they tower, because I devour
Any other rapper and I can prove it now or
A little bit later, cause I'm a graduator
From a rhymin alma mater, but some say alma mata
Like you say patata, I say potato
Tomato, tomata, my data's up to data
Cause somethin is the matter with those of you say dada
Could mean opposite of mama, like the kids at wonderama
I'm very good at actin, I'm very good at drama
I confuse you with a period, colon and a coma
Cause when I'm rhymin and I take a pause
You think the rhyme is over but when you and yours
Really check out what I'm doin, then you say ooh
When they say who's the best mc to you
You'll look at me, then you say I know who
(moe dee, moe dee...)
It's kool moe dee
(moe dee, moe dee...) 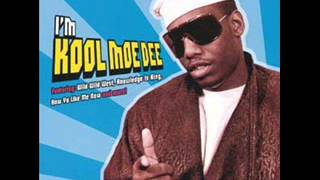