I'm walking in the mini mart there's food on the floor
There's carts everywhere, there's blood on the door
I just want to buy some snacks and get back home
But these ghouls are trying to eat my bones

I called my friend to see if he could come by my place
By the time he reached my door he was missing his face
I feel kind of bad that I did not let him in
But without his lips he still had a grin The Zombie Apocalypse is messing up my week
It's hard to watch the Daily Show
Over all the cries and screams
Zombie Apocalypse,
I'd rather fight a shark
I read in a book that you can punch 'em in the eye
But sharks aren't my problem, yeah, and zombies are

I've never seen so many girls outside without their clothes on
Normally I'd think that's awesome but it's actually a turn off
Cause I'm not in to necrophilia, that's a fact

Zombies moving slow, I feel like Jackie Joyner Kersey
Like the popular kid in school and everybody wants a piece of me
But they can't, cause I like my pieces intact

It's getting kinda lonely out here by myself
Food's running low, there's dust on the shelf
But at least I have the voices arguing in my head
Which is much better than being undead 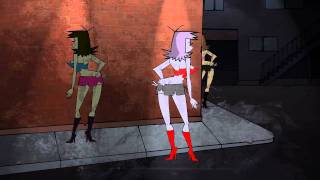