Long time ago, before the iceage, people lived in
perfect harmony with the nature in a system that didn't
give possibility for overpopulation
As the aksel of the planet (plan-et) was in its right
position, straight, all the planet was under stable
tropical elimat. So was also Odenmaa at the northpole
There lived the Asers who held the highest knowledge
on earth with the ROT (root) -language. Outside
Odenmaa lived the vaers in their ringlands.
Everybody paid respect to Per who due to the
breeding-system was the allfather of all mankind
(everyone is a PER-SON)
Over 50 milj. 10000 years ago the aksel of the planet
shifted and caused the iceage when the ringlands
outside were covered by ice, a perioid called
ALT-LAND-IS
ALL LAND'S ICE
As the Gulfstream came to heat south-Finland,
Odenmaa remained clear of ice and the Asers learned
a new way of life
Agriculture and new animal species were created for
staying alive for 50 milj. years surrounded by huge icebergs
As the ice startd to mel and drown Odenmaa the
very few of them left took pairs of the animals with
them and sailed through a passage way melted by the
stream to Bockland an island outside of Sweden,
later named Goatland (Gotland).
After staying there for a thousand years the Asers
headed back to Odenmaa except SVEN and DAN who went to
Sweden and Denmark to rehabite the ringlands.
During ALTLANDIS the Vaners develloped into ten
different races, mythologies and languages outside
the icebergs
The asers lived in Odenmaa again till the year 1050
when the crusader army sent by the Pope
destructed Odenmaa and created a new information
system based on the written word not spoken as it
used to be.
This is a tine part of a story that takes 20 years to tell
two hours a day brought to us as familytradition by
the last Aser since 1984, according to the saga
10 000 years after the end of the iceage.
Explain lyrics
Correct lyrics 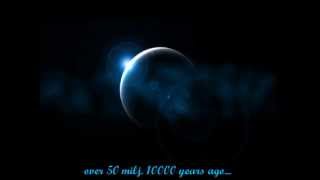