I Got Pulled Over Lyrics

I Got Pulled Over Lyrics


There they go over there
Aw man, shit
I gotta get up off my ass
And go chase these cholo muthaf*ckas
I hate those f*ckin' Mexicans

I'm always gettin' caca from the blaca
The B.G. hooter always pull me over
Take me out the rafla, sit me on the curb
And then they look me over

They ask about my beeper, I'm not a dope dealer
This is the Cherokee 4 wheeler if I was sellin' drugs
To all of the street thugs yo, I don't mean to brag
But I'd be drivin' in a Jag

Yo, go ahead and write your ticket
But hey yo, Mr. Officer, you know where you can stick it
I say this to myself, I let him do his thing
Or he might beat me down just like he beat down Rodney King
I got pulled over

Hey, don't that truck look familiar?
Yeah, that Cherokee over there?
I think that belongs to that fat f*ck ah
That La Raza muthaf*cka
Let's go f*ck with him

Hey buddy, hey
Alright, you f*ckin'
Get your f*ckin' fat ass out the car

It's 12 o'clock, late at night, I grab my keys
Kid Frost put me up with a skeez so I roll a blunt to go
On that late night hype, who gives a f*ck about five-o?
I'm knowin' that they're schemin' but f*ck it

'Cause they cop car's a goddamn bucket
Geah, I ain't sweatin' shit, check the Eight
So they run a make on my goddamn plates
So I hit the next corner real slow
Low, here it go

The same old routine because of my car, black
Mistaken identity for slingin' that dope sack
And just because Compton's my playground
They want a nigga like E to stay way down
But I done had enough with harrassin'

Like I said, one time still gafflin' I know they up to no damn good
Jackin' a nigga, cause I'm seen in the hood
But I best switch from a Benz to a Nova
To prevent them from pullin' me over

Pull your ass over and get on the sidewalk
Lock hands and feet you know the routine, nigga
Yeah, nigga, you rollin' down Alondra like you own this muthaf*cka
Where the sack at, muthaf*cka, where the sack?

The sack?
Nigga, ain't no sack the only sack is my nut sac
You got the MC Eight mixed up with these other clockers
Get off the dick, muthaf*cka

ALT, that's me, I'ma flex again
The hooter, they were dyin' to shoot another Mexican
So I learn, if I don't wanna burn
Then I pass up my exit, 'cause I'm afraid to turn

And if I don't, then that pig will be vicious
'Cause every Hispanic at night is suspicious
I'm thinkin' to my mind that I can hardly bare it
I heard, "f*ck the Police", but they forgot about the sheriffs

And if I said it, then I might get beat down
And I ain't goin' out by a clown in a brown gown
They ain't passin', no time for dashin'
Looked in my mirror, I seen red lights flashin'

He had his hand on his gun on his hip
And when he walked up, yo, that dumb f*ck tripped
He was pissed, he said that I gave him some lip
So he busted me, now I'm in custody

Hey, Honcho
Get your taco eatin' ass out of the car
What's your f*ckin' name?
I'm ALT but what the f*ck did I do?

Get your f*ckin' ass over there on the curb
What's the bitch's name?
Hey man, don't call my old lady a bitch 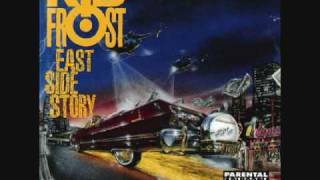