Dennis, Hook Me Up With Some More Of That Whiskey! Lyrics

Dennis, Hook Me Up With Some More Of That Whiskey! Lyrics


[Intro]
Dennis, you gotta hook me up with some more of this whiskey
Turnt up

[Verse 1]
Now I don't give a f*ck what niggas doing
Worrying 'bout my thousand dollar pants
Wake up, bake up in the limo Benz
Come to think about it, don't have many friends
Go to brunch by my damn self
Flirt with girls when they see my car
f*ck 'em when they see that I'm a star
Never ever open up and show my heart
It's the coldest winter in the summer, dawg
Many women, mothaf*ck 'em all
They just really want to train a dog
I'm a real nigga to the core
I've got baby girl by the mall
Pedal to the metal to the floor
I'mma holler while I'm hitting corners hard
Yeah I gotta hit them corners hard

[Break]
I guess I'm just a lost cause
Just a skinny nigga with so many flaws
Starin' in that night, tight drawers
Fingers digging right inside my palm
Waitin' waitin' for the calm
Seen the thing, I know what's goin' on
I'm finally comin' alive
And it seems the ghost is movin' on

[Interlude] You know what that is? I told you what that is, that's a alien bruv, believe it
(Those guys didn't think I would do it, I told you I was gonna do it)

[Verse 2]
See, I could never have a desk job
My work take a nigga abroad
Meeting up late with foreign broads
Relaxing cause a nigga hustle hard
Man I gotta take a load off
Meet a dime, let her take her clothes off
Took a trip out to Doha
Filmin' short films on a whim
Got dinner in a few with prince Sheikh
Kanye change a nigga life twice
Gotta ride, gotta rep, ay
Getting rid of all the dead weight
Niggas really want me dead, hey
Not my fault I'm intriguing
Drinkin' and drivin' and weavin'
Pop a molly, feelin' ten again
Project X type weekend
Except a nigga damn near thirty
Like twenty one will never end
Here I go with my second wind
You already know I'm goin' in
And I've been waitin'
I've been waitin' to shit on you 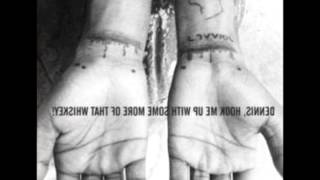 check amazon for Dennis, Hook Me Up With Some More Of That Whiskey! mp3 download
these lyrics are submitted by BURKUL4
browse other artists under K:K2K3K4K5