The Kid (he Swears A Bit) Lyrics

The Kid (he Swears A Bit) Lyrics


First time he'd ever had shoes on, very first day at
school
And the sweet young teacher, straight from college, her
first day there too
His Mum and Miss Brown chatted about living out there
in the scrub,
And how he'd grown up with the shearers and how he'd
done it pretty rough.

But he could cull and crutch and dip and dag though he
was only six,
"But I think it's best to warn you, she said, he swears
a little bit"
"I'll keep me eyes on him", Miss Brown promised,
"He can be my helping hand, and I'm sure we'll be the
best of friends, now won't we, little man?"
He didn't even raise his eyes, he just bit his bottom
lip and shuffled sand with his new shoes and said "I
don't give a shit".

"Now, now", she said "if you don't swear I'll let you
ring the bell", he said "You're supposed to be the
f*ckin' gun, go ring the cunt yourself"

"But tell me what time's f*ckin smoko?
What time do we knock off?
And I'm busting for a f*ckin shit where's the
thunderbox?
And do we get our daily rollie weed and six cold cans
of piss?
And can any bastard tell me, whose f*ckin' show is
this?"

But that didn't seem to phase her, she just knelt down
next to him
And sweetly smiled and softly whispered, "We'd better
start again,
Because you must learn not to swear like that because
it's against the rules",
he said "Well, stick your rules, and stick your shoes
and stick the f*ckin' school"

But she just grit her teeth and forced a smile, and
didn't let it show
She just said "Let's both go on the verandah and we'll
have another go,
Now if you stand here beside me, you can help me call
the children up" he said,
"You don't need me to help ya, what you need's a
f*ckin' mutt"

But again it just bounced off her, and she let his
comment pass,
Had've been me I would've kicked that midget mongrel up
the arse
But she said "Now listen carefully boys and girls, and
please don't make a sound"
"You tell 'em lady, now you bastards, gather around"

"and find out what time's f*ckin smoko?
What time do we knock off?
And I'm busting for a f*ckin shit where to find the
thunderbox?
And do we get our daily rollie weed and six cold cans
of piss?
And can any bastard tell me, whose f*ckin' show is
this?"

That kid had turned the schoool right on its ear And come recess time, two teachers'd had funckin' heart
attacks and another six resigned
But through the barragh and the bedlam, Miss Brown just
keep her cool,
and just ignored the little arsehole who was tryin' to
wreck the school

The head said "just hide here in the staffroom until
things settle down
It's really quite a lovely school, you'll get to like
it here Miss Brown"
But back out side there in the schoolyard things were
getting pretty hot
The little cunt had formed a union and signed all the
other mongrels up
'Cos he'd learned proper from the shearers, and
remembered what they'd taught
He'd promised one day on and three days off, and if it
rained, don't come at all.

But meanwhile, back the in the building the staff were
shitting broken glass,
As the little sawn off savages started chantin' their
demands

They said "Oi, what time's f*ckin smoko?
What time do we knock off?
And we're busting for a f*ckin' shit, where's the
thunderbox?
And do we get our daily rollie weed and six cold cans
of piss?
And can any bastard tell us, whose f*ckin' show is
this?"

The shit-scared head just shook and trembled, as he sobbed
"Stick with me staff!"
As one boy, one those left behind, up and bolted for
their cars,
And they knew their head had gone ta-das and his spring
had finally sprung,
when he pissed and shit his daks, and started screaming
for his Mum
(Muuuuum, Muuuuum!)

Then Miss Brown volunteered and said, "I know I'm only
new,
but I spent my life around shearing sheds, I'll see
what I can do,
Because my brothers are all shearers and I was once
their roust-about,
So I'll go out there if you like, and try and sort the
problem out",
She ducked and weaved and sidestepped, as she walked
across the yard,
And straight up to the little cunt, drinking rum and
playing cards,
And when she decked him with a four by two, the whole
school stopped and gawked, and she said
"Listen here you little cunt, we need to f*cking talk

'Cos there ain't no f*cking smoko, I'll say when we
knock off,
I'll tell you when to f*cking shit too, 'cos I'm the
f*cking boss,
You can forget you f*ckin' rollie weed, you'll get f*ck
all here for free,
and if you want to know who runs the show...f*cking ME! 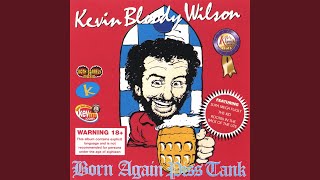 check amazon for The Kid (he Swears A Bit) mp3 download
these lyrics are submitted by kaan
these lyrics are last corrected by Big daddi on March 19, 2020
Songwriter(s): CHRISSIE HYNDE
Record Label(s): 1993 Both Barrels Music
Official lyrics by