Sheila You Were There Lyrics

Sheila You Were There Lyrics

And I remember the first time I ever got you drunk cheap wine in the
back'a me ute,
You got the hic-cups laughin' and fartin' and all I wanted was a root,
But I only ever got to kiss you that night at the gate when I dropped
you off,
Stuck me tongue in your mouth you hic-cupped again nearly bit the
bastard off,
Seems like a long time ago you know but Sheila, you were there.

And what about the engagement party, 'til you announced out loud,
Your menstrual cycle blew a tire and you were up the spout
Your ol' man chased me with a chainsaw, cut me arm off up to here,
Chainsaw hadn't'a run out'a juice there'd be bits'a me everywhere,
Then he tried to stab me with the f*ckin' thing but Sheila, you were
there.

And who'd have forget the weddin' day, the wind the rain the sleet,
And how's your timin' breakin' your water when your ol' man was
makin' his speech,
The ambulance slipped and spun you dropped your bundles f*ckin'
lucky I'm not dead,
Doc dropped his glasses drunken bastards hacked off me f*ckin' leg,
Yeah you talk about startin' off on the wrong foot, Sheila, you were
there.

Yeah and it's hard to raise a mongrel kid when you're balancin' on one pin,
And he sneaks up on your glass eye side and you can't catch the
cunt to hit him
That kid crashed me tractor, sold me car crew wacky weed back'a
the shed,
Coppers come 'round burnt the joint to the ground never seen that
f*ckin' kid again,
Yeah we lost the lot when he f*cked off but Sheila, you were there.

So out I went out back rabbit trap, anything to make a quid,
Was takin' a crap when a rabbit trap snapped and hacked off the
knob'a me dick,
Then that stupid mongrel dog'a your's went and buried me knob
somewhere,
I reckon you know where he buried it too 'cause Sheila, you were
there,
Yeah just turned around and me donger was gone but Sheila, you
were there.

So here I am minus the knob'a me cock me eye me leg and an arm,
And after bustin' me balls and losin' me nan aw, not to mention the
f*ckin' thumb
Now the doc tells me that me dick is f*cked, and I ain't got long to
live,
And in me final hours, Sheila, you're still here,
Yeah should'a known you'd be there when I go, Sheila, you were
there. 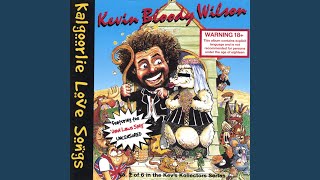 check amazon for Sheila You Were There mp3 download
these lyrics are submitted by Ad
Record Label(s): 2011 KEVIN BLOODY WILSON