Well I've heard there was a sacred chord
David played and it pleased the Lord
But you don't really care for music, do ya?

Well it goes like this, the fourth, the fifth
The minor fall and the major lift
The baffled King composing Hallelujah

Well, your faith was strong but you needed proof
You saw her bathing alone on the roof
Her beauty and the moonlight overthrew you

And she tied you her kitchen chair
She broke your throne, she cut your hair
And from your lips she drew the Hallelujah

Well baby I have been here before
I've seen this room, and I've walked this floor
You know I used to live alone before I knew ya

Well there was a time when you let me know
What's really going on below
But now you never show that to me, do ya?

And it's not a cry that you hear at night
It's not somebody who's seen the light
It's a cold and it's a broken Hallelujah, oh 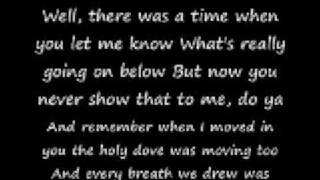 Rate Hallelujah by Kate Voegele (current rating: 9.60)
12345678910
Meaning to "Hallelujah" song lyrics (3 meanings)
ashley April 28, 2010-9:25
0
i love her and her music shes amazing the first time i heard this song was on one tree hill and fell in love with it
B-YoN December 31, 2009-11:42
0
This girl is wonderful. I love the voice and the lyrics. the old Cohen Leonard really deserves the canadian award 2010. he is a psalmist to compose this kind of song. It is simply wonderful
T November 26, 2009-12:53
0
A beautiful song that has so many meanings. So many takes have been done on it, and it has changed a little with every take. Gradually it evolved into the beautiful flower Kate Voegele has inspired. x
Watch Video Comment Enlarge font Correct lyrics Print lyrics