[Verse 1:]
I’m like the Energizer bunny, I’m a lifelong lasting
battery,
I used to struggle to write these songs, but now this
shit just comes so naturally,
I don’t know when I’ll quit stop asking me, you f*cks
are getting so annoying,
If you ask me one more time I swear to God you will
never hear the last of me,
I’ll stuff your face ‘til you suffocate, f*ck the wait
I’ll bust a grape,
Now must I say I’m just insane and if you don’t like it
run away,
My life’s a game, you want to play our fun can end
another day,
But you better catch up before I win, you’re losing kid
I’m one away,
I’m going to say what I’ve come to say now drop to your
knees and learn to take it,
Monster sleeping in my head and I guess it wouldn’t
hurt to wake it,
False, it’ll only be worse to make it angry to the
point that it rips you naked,
I promised that I’d never blow now watch me take my
word and break it.

[Chorus:]
You can’t escape from this place so just stay right
there,
When you’re trying to fight these demons they don’t
fight fair,
I look right into the kiddy’s eye like hi there,
Welcome to my asylum it’s a nightmare.

[Verse 2:]
Mr. K. Sleezy has feelings like me, but he was the
first damn person to show it,
I got the little guy living inside my head what am I I
said it’s a curse and I know it,
But I need him by my side to give me the strength and
courage I need to verse my opponent,
And pop out, smack him around for a bit ‘til he’s
screaming cause it hurts when I donut,
“Wait, what about a donut?” A donut.
Donut? Yeah, don’t you like donuts? Nah. Have you ever had a Hurtz donut?
What the hell’s a Hurtz do… (Punch) Hurts, don’t it!?”
(Hahahahahaha!)
I’m here to stay for rounds to come so you better pack
a lunch marine,
Cause boy I’m sick I’m the type to stick my dick in a
Pack-A-Punch machine,
Girl I ain’t playing with you, what’s this look like
Call Of Duty, God you’re fruity,
Look at you you’re all into me, pull yourself together
hottie oowee!

[Verse 3:]
Speak to the devil then I sell my soul, pedal to the
metal then to hell I go,
There’s a fairytale in everybody, let me tell you the
tale of a tale I know,
This right here is the story of a man who just doesn’t
know where the hell he’s been,
Or where the hell he is, so tell me this, can you try
to put your mind where your belly is,
Try having your thoughts shoved down your throat all
day long you can tell he’s pissed,
You want my two cents on a record now here’s a penny
for my thoughts try selling this,
I give my thoughts to the mic and it looks back at me
like what the hell is this,
I’m a second away from pulling a gun and putting more
holes in me than a deli Swiss,
Load it, cock it, aim don’t stop it, point to my head
say cheese and shoot,
Men look at me like what the hell, women look at me
like he’s a hoot,
What got me here is the one thing that I cease to do,
but it’s pleasing you,
Want me to tell you my biggest secret (yeah) well
that’s too bad cause I’m teasing you. 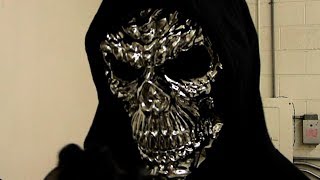