[Verse 1: Kanye West]
I'm the one, baby
Yeah, I'm the one, baby
Since God gave his only begotten son, baby
It's hard preachin' the gospel to the slums lately
So I had to put the church on the drums, baby
You on a run, baby
You on a run, baby
You think you free but you a slave to the funds, baby
You think you me, but you ain't me, what you done lately?
Mmhm that's cool but I been runnin on the sun, baby
We on a galaxy that haters cannot visit
That's my reality so get off my Scott Disick
If you ever held a title belt you would know how Michael felt
Tyson, Jackson, Jordan – Michael Phelps
Yeahhh, had to take it to another 'round
Cause everything around me got me underwhelmed
Best way to describe my position is at the helm
Best way to describe my new whip – Yeeeaaaalmmm

[Verse 2: Big Sean]
I told Detroit I'mma f*ckin' get it
I told my brother we'll be f*ckin' winnin'
Ye told me I'm the man for the job
So I told my mom, call her's up and tell 'em that she quittin' Started off in that Chevrolet, but it's Ferraris I gotta drive
I'm on HBO with my Entourage I'm 5'9” f*ckin' 9 to 5
I need a hundred million no compromise
I'm a double X L nigga
Magazine and condom size, see what I seen and be traumatized
I don't wait, I marinate, variate erryday
Erry state, sold out, f*ck around and need a barricade
My weed loud I need a hearing aid
Livin' life behind a pair of shades
I be a billionaire if I could get a dollar
For all the bullshit that I hear a day
I did it

[Verse 3: 2 Chainz]
Treat the back seat like a sofa bed
Break bread with my niggas, call it profit share
This some good shit, but it get better
And yeah my bitch cold, nigga feelin' sweater
Like my verse suede and the beat leather
Just tryin' to stay above sea level
When my nigga went to jail, I said, “Free Gucci”
I done bought so much shit, I should get free Gucci
Bought my baby momma anaconda bags
I shouldn't have bought it all, I should've went and cut the grass
Snake ass niggas in my f*ckin' face
Bring your girl here nigga so I could f*ck her face
Yeah I run this place, this is cash mill swag
Niggas treadmillin' goin' nowhere fast
Sittin' courtside at the house game
Louie's on, I could trip a f*ckin' ball player

[Outro: James Fauntleroy] x2
f*ck yeah, awesome, yeah I lost some of my mind
And then I found weed was really kind of awesome
It's possible, goddamn right
I've been honest the whole time 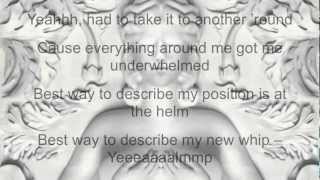 check amazon for The One mp3 download
these lyrics are submitted by BURKUL3
Songwriter(s): K. Martin