[Akil]
We rolled up to the spot about a half past noon
Jumped from the horse, slid into the saloon
Walkin in the spot I heard the musicman stop
Danced up to the bar, a double snapple on the rocks

[Chali 2na]
Now mr. bartender told me strangers get flack (Really black?)
But they'll be f*ckin with the black billy jack
Feel the mack, ?? you can never even got the chance bro
We move the crowd like we were ??

[Akil]
And my drink he never passed it, he got real sarcastic (Fat Bastard)
You them niggas from the crew called Jurassic
Talkin mad shit as his face showed a frown
You niggas better leave before the sun go down

[CHORUS 1]
Cuz uh, we be the king of, the verbal gunslingers
You better bring a casket, a preacher and a singer nigga
We be the kings of the ones that brought static
I use my rhymes like a glock automatic

[Both]
Ay yo, somethin lookin fishy yo I think we better watch
Yo, I'd make sure you got your trigger uncocked
Yo I'm sayin real niggas always deal a gun blast
Get the horse, kiss the girl, grab the mic and let's dash

[Chali 2na]
Cuz uh, we be the king of, the verbal gunslingers
You better bring a casket, a preacher and a singer nigga
Cuz when the lead locks on it don't let ya
I'm not a grifter more like a high-plains drifter

[akil]
And as the plot kickened, thickened, niggas started shovin me
Muggin me, tuggin me, into the good bad and the ugly
Troubly doubly I grabbed a glass full of bubbly
Publicly rubbin me I told my nigga Chali cover me [Chali 2na]
Yo, I gotcha back and I'm buckin I'm lookin back and I'm duckin
I'm tryin to get us the f*ck out the place
Brothas who was harassin we was doin the blastin
Yo suit go get us the bucks out the safe

Dead men never tell about the things they saw
The stakes is what can make a man become an outlaw
Hey, we be the peeps who keep the past alive
2na fish, and Akil from the Jurassic 5

[Akil]
Ay yo peeps has been grand, but understand we in a hurry
Emergency currency, many niggas that wanna murder me
Heard of me
And 2na fish ?? capacity keepin the west blazin like Sundance and Butch Cassidy

[Chali 2na]
Man, we need some type of plan cuz peeps is skanless
Thinkin that they can make a man hush with the ambush
My man bust til you crack the safe
Yo back is safe and we gon take the back escape

[Both]
Now if you don't know who we are, I suggest you better hiiiide
Or look down the devil's eye, sing a lullaby
And the picture on my poster make my left side my best side

[Chali 2na]
I'm on my last two rounds I let a thousand free
I heard the bartender called for the cavalry
Now they outside, waitin on my ??
Verbal gunslinger forever and proud to be

Cuz uh, we be the king of, the verbal gunslinger
And now they got the casket, the preacher and a singer cuz they
?? at the ??
Stay alive yo!
Rhymin with our back to the wall, tryin to survive the fall
Cuz dead men never tell about the things they saw
The stakes is what can make a man become an outlaw
Hey, we be them peeps that keep the past alive
It's 2na fish, and Akil, from the Jurassic 5 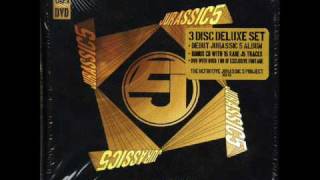