[Juicy J]
Late last nite, I was in the bed, eyes red
Thinkin' about project pat, and what the f*ckin jury said
Givin' him what they gave him, then they put him in handcuffs
Motherf*ck dem laws, I'ma make you put yo hands up
Don't cross the line, yellow take the police brand up
Outside the court, Norf Memphis and we klanned up
I can be a leader, bring the heata, like a farakhan
I can be a terroist to the government like a taliban
Long as ya black, and ya wrist they put they targets on
Watchin' niggas every move, tappin' niggas cell phones
Don't, Fall, for the okay, Don't, Call, and I'll bring the dope
And we gon' smoke we till the break of dawn
Trapped in this hood where there ain't no motherf*ckin bon
And to that officer I know your stompin' ground here
But If you ain't from my hood, get yo ass from round here

[Crunchy Blac]
First I'm gonna catch the bitch
Then I'm gonna beat the bitch
Then I'm gonna bury bitch
Shouldn't of been talkin' shit
You knew who you was f*ckin wit
f*ckin wit the f*ckin best
She who you f*ckin been
Now I'm aimin' at yo chest
This goes out to all of y'all
All of y'all be talkin' shit
Slip the clip up in the gun
Then commence to bust a nig
Bust a nig, at ya dawg Watchin' you niggas fall
Screamin' out like a bitch
Mane that's just some petty shit

[Lord Infamous]
I'm into blood baths, I don't, fine I'll punch ya
I'ma hit yo ass wit the f*ckin rocket launcher
Can you stand the pain, insane, bounty hunta
Stop long, see ya pulp, till ya unconscious
Throw you in the dumpsta, lord catch a conquer
Lord don't, pistol play jump up, if ya want ta
This is the unda, buried by yo momma
Not only do I murder mane I also am bomb ya

[Juicy J]
Picture this, you a juror and you on the stand
And you about the judge the life of a black man
Young brotha from the hood made it rappin' and
Wit a knot in his pocket weighin least a grand
Here's the story he got caught wit some fire arms
By a crooked ass cop wit his siren awn
He was known as a felon made it bigga than state
The whole case turned fed made him lose his faith
Picture this, now the judge he got hatred for crooks
Because ten years ago he was appointed by bush
Republican white man, and he don't give a f*ck
If the guns wasn't his that was found in his truck
Prosecutors, shady lawyers, mane who can you trust
All this palm greasy shit, mane it's bigga than us
Make you wanna be like f*ck it hit the trunk of the car
Deliberation it was time for the jury to star 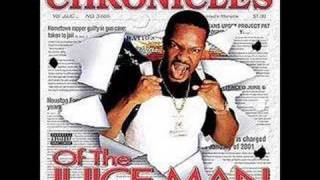