The Pledge Of Allegiance Lyrics

The Pledge Of Allegiance Lyrics


I PLEDGE ALLEGIANCE TO THE FLAG
OF THE UNITED STATES OF AMERICA
TO THE REPUBLIC FOR WHICH IT STANDS--
ONE NATION UNDER GOD,
INDIVISIBLE,
WITH LIBERTY
AND JUSTICE
FOR ALL.

"I pledge allegiance to the flag"

What do those words mean to you? To me they say, "Thank
you, America, for your strength, your courage and your
freedom...which has been a beacon to the world for two
hundred years."

"Of the United States of America"

Whose bright stars are fifty states...each bearing its
own stamp of individuality. People...two hundred
million strong...people who have come to her from all
corners of the earth.

"And to the republic for which it stands"

A land of laws...with an ingenious system of checks and
balances that allows no man to become a tyrant...and
lets no group prevail...if their power is not tempered
with a real concern for the governed...A land where the
right of dissent and of free speech is jealously
guarded...wheere the ballot box is the sword...and the
people its wielder.

"One nation under God" A land where freedom of worship is a cornerstone of her
being...A land graced with temples and churches,
synagogues and altars that rise in profusion to embrace
all the religions of the world.

A land forged by the hot steel of raw courage...and
formed forever...by the awful crucible of civil war.

Where man in pursuit of an honest life will not be
denied his chance...where her citizens move freely
within her vast borders without hindrance or fear...A
land brimming with opportunity...where freedom of
choice is the guide for all.

The courts of our land are open to all. Its wheels of
justice grind for all causes...all people. They look to
every avenue for justice...every concern of the
law...and they temper their reasoning with mercy...

I PLEDGE ALLEGIANCE TO THE FLAG...
OF THE UNITED STATES OF AMERICA...
AND TO THE REPUBLIC FOR WHICH IT STANDS...
ONE NATION UNDER GOD...
INDIVISIBLE...
WITH LIBERTY...AND JUSTICE...
FOR ALL. 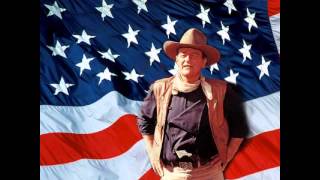 check amazon for The Pledge Of Allegiance mp3 download
these lyrics are submitted by kaan
these lyrics are last corrected by David Jacobs
browse other artists under J:J2J3J4J5J6J7J8J9
Record Label(s): 2011 JOHN WAYNE
Official lyrics by