[Mr. Machen]:
11:55, almost midnight. Enough time for one more story. One more story before 12:00, just to keep us warm. In five minutes, it will be the 21st of April. One hundred years ago on the 21st of April, out in the waters around Spivey Point, a small clipper ship drew toward land. Suddenly, out of the night, the fog rolled in. For a moment, they could see nothing, not a foot in front of them. Then, they saw a light. By God, it was a fire burning on the shore, strong enough to penetrate the swirling mist. They steered a course toward the light. But it was a campfire, like this one. The ship crashed against the rocks, the hull sheared in two, masts snapped like a twig. The wreckage sank, with all the men aboard. At the bottom of the sea, lay the Elizabeth Dane, with her crew, their lungs filled with salt water, their eyes open, staring to the darkness. And above, as suddenly as it come, the fog lifted, receded back across the ocean and never came again. But it is told by the fishermen, and their fathers and grandfathers, that when the fog returns to Antonio Bay, the men at the bottom of the sea, out in the water by Spivey Point will rise up and search for the campfire that led them to their dark, icy death. [bells ring distantly] 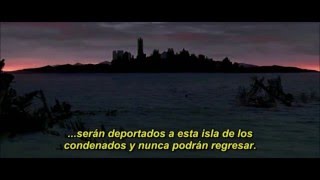