Hold What You've Got Lyrics

Total views: 0 times this week / Rating: 9/10 [1 vote]Album: Skinny Legs And All / Original Release Date: 1994Genre: R&B/SoulSong Duration: 3 min 06 sec
Joe Tex - Hold What You've Got
Give The Baby Anything The Baby Wants Ain't Gone Bump No Mo With No Big Fat Woman God Of Love I Gotcha I'll Never Do You Wrong Papa Was Too One Monkey Don't Stop No Show Loose Caboose The Love You Save Skinny Legs And All
Joe Tex wiki Hold What You've Got video Joe Tex twitter

Hold What You've Got Lyrics

'Cause if you think nobody wants it
Just throw it away and you will see
Someone will have it before you can count
One, two, three, yes, they will, yes, they will

Listen fellas, you know, it's not all the time
That a man can have a good woman
A woman that he can call his very own
A woman who'll stay right there at home
And mind the children while he's gone to work

A woman who'll have his dinner cooked
When he comes home
Where some men make mistakes is when they go out
And stay because they feel that no other man
Wants his woman but him, but listen

If you think no other man wants her
Just throw her away and you will see
Some man will have her before you can count
One, two, three, yes, they will, yes, he will

Ha, ha, listen girls, this goes for you, too
Because you know I've seen so many women
Who've had so many good men in life

Where some women make mistakes
Is when their men go out and let 'em play
They would stay because they felt that no other
Woman wanted him but her, listen

If you think that no other woman wants him
Just pitch him out in the streets and you will see
Some woman will have your man before you can count
One, two, three, yes, you will, yes, you will
Explain lyrics
Correct lyrics 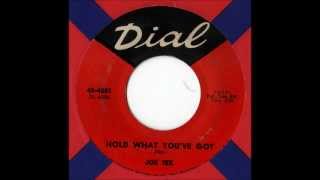