It's My Nose's Birthday Lyrics

It's My Nose's Birthday Lyrics


The other night I'm walking home
and feelin' so gay
When I'm walking home I'm always that way
What a home I got
The kitchen is delightful, the living room is grand,
and the bathroom is out of this world.
Which makes it a little bit inconvenient.
When I opened up my door I got the grandest suprise
All my friends were there and they began to harmonize
Wait a minute, wait a minute!
Curb your enthusiasm, this isn't my birthday.
No, but it's the birthday of someone near and dear to me
It's my Nose's Birthday not mine
And I'm proud to say the snoz is doin' fine
My nose was born upon this day in eighteen ninety three
Exactly two weeks later the stork delivered me
Was the first time that a nose outweighed the child
When I was born my dad took one look at my snoz and said:
Stork, take that back!
Just because our country's emblem is an eagle
that don't mean we have to raise one.
But in spite of my dad
the snoz and I are closer than David and Pretentious.
Not even a mustache has ever come between us
I tried to raise a mustache once and what happened?
nutin'
It wouldn't grow in the shade
it's sabotage
But I'm as happy as I can be
cuz' it's my nose's golden anaversary. Looking back over the years
The snoz and I weathered many a storm.
I remember years ago my first train ride
I was on a lower birth when I decided to call the porter
So I stuck my nose out through the curtin and what happened?
The porter came by, grabbed my snoz, and before I could pull it back in
He brused it, shined it, polished, and said:
Now where's the other shoe?
A big tear started to roll down my nose
and it's a brave tear that will start on a trip like that
I felt sorry for the snoz
but I'm proud of 'em
Why?
I'll tell ya:
The snoz was never unreasonable
he'd never asked for no french rolled handkerchiefs,
he didn't need no french rolled handkerchiefs
a whipe of the cuff was enough.
Yes. And I'll never forget the time the snoz saved my life.
I was one of those sultry weekends at the beach
I'm in the water swimming the Australian crawl
when I find myself face to face with a vicious swordfish
he was about to attack, but after taking a second look at me the sordfish said: "I give up, you're equiped with a superior weapon."
So ya see
I'm as happy as I can be
cuz' it's my nose's golden anniversary,
cuz' it's my nose's golden anniversary. 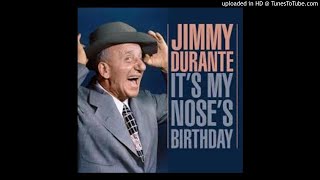