There is a tale that the island people tell,
Don't care if it is true
because I love so well
Jolly mon sing for his supper every night
the people fed him well
cause he treated them so right

He was making his way home on a dark and stormy night,
When he a heard a cry for help
he saw a flashing light
When he reached the other boat and offered them a hand
They said, "Give us all your cargo."
As they took a pirate stand ooohhh Jolly mon sing
ooohhh give them everything

Jolly mon its over since you laugh so very well
They tossed him in the ocean
cause their hearts were made in hell
Came along a dolphin he said, " Jolly Mon hello!"
I've always loved your singing Climb on board don't let go 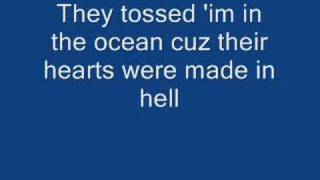