Bella was bored to death at South Beach,
Not one celebrity spotted in days
She was tired of her mood, lunchin' on vegan food
She was tired of just soakin' up rays
Then she saw him pull up to the stoplight
In an old ragtop that she couldn't name
He said, "Hop inside, I'm headin' south, take a ride,
I'm just the next man that you're gonna blame."
U.S. 1, headin' down U.S. 1

Lenny said, "How 'bout lunch in Key Largo?
There's a fish sandwich place down the road
Kinda out in the sticks, but we can be back by six,
Never leave our area code."
Well, geography wasn't her strongpoint-
She'd never been past the Dadeland mall
So they stopped on the way, Lenny was happy to pay
For her new thong and purple beach ball.

Havin' too much fun to turn back
They're explorers in a hotrod Ford They counted seabirds and cars, stopped at all the cool bars
Harmonically they struck a chord

Stop! What was that?

Somewhere in the middle of the Seven Mile Bridge,
He said, "Bella, do you wanna see the rest?"
She said, "I haven't a care, Lenny, just take me there"
And they drove all the way to Key West.
Well, she'd never seen anything like it
In all of her twenty-six years
Bella was feelin' the groove, Lenny was makin' his move-
They were quite a pair of pioneers.

End of the road? What do we do then?
Rev it up, and jump that buggy to Havana
We're goin' conky tonkin'.
Explain lyrics
Correct lyrics 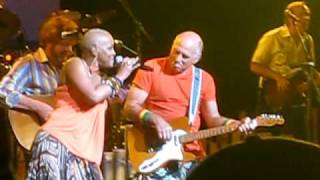