Take Me Away Lyrics

Take Me Away Lyrics

There was a string of wild flowers
Draped around his collar
And when he saw the men were coming for him
Well, he began to holler

Now his mama she watched religion on the TV
Each day from dawn to dusk
And at night when she'd hear him howling
Well, she'd cried to Jesus

She told them, "Take him away, take my son away
'Cause after 20 long years I've simply run out prayers to pray"

As he stepped into the golden sun
Of the headlight of the oncoming train
And as he did he locked eyes with that stranger
He cried out one last time
He cried, "Take me away, please, take me away" 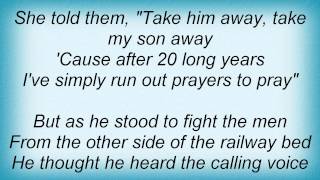