ALL (inside)He is dangerous!
MOB (outside)Tell us that you're who they say you are.
PRIEST 2That man is in town right now to whip up some support.
PRIEST 3A rabble rousing mission that I think we must abort.
ALL (inside)He is dangerous!
MOB (outside)Jesus Christ Superstar!
ALL (inside)He is dangerous!
PRIEST 2Look Caiaphas- they're right outside our yard.
PRIEST 3Quick Caiaphas- go call the Roman guard.
CAIAPHASNo, wait!
We need a more permanent solution to our problem.
ANNASWhat then to do about Jesus of Nazareth?
Miracle wonderman, hero of fools.
PRIEST 3No riots, no army, no fighting, no slogans...
CAIAPHASOne thing I'll say for him- Jesus is cool.
ANNASWe dare not leave him to his own devices. His half-witted fans will get out of control.
PRIEST 3But how can we stop him? His glamour increases
By leaps every minute; he's top of the poll.
CAIAPHASI see bad things arising.
The crowd crown him king; which the Romans would ban.
I see blood and destruction,
Our elimination because of one man.Blood and destruction because of one man. 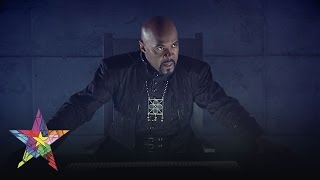 check amazon for Jesus Must Die mp3 download
browse other artists under J:J2J3J4J5J6J7J8J9

Rate Jesus Must Die by Jesus Christ Superstar (current rating: 7)
12345678910
Meaning to "Jesus Must Die" song lyrics (2 meanings)
Liam Farrell December 24, 2010-7:18
-4
You pathetic wench. Satan is as there as ever, as trhere as your precious Jesus, who, i might add probably never existed. and if he did exist, he certainly did not do all that was said.
Hannah Sutter September 28, 2010-18:48
-4
I have a problem with this band. Jesus is alive and is if you like it or not. I love Him. Satan has been defeated forever. Jesus paid the price and you don't even acknowledge it. That is so sad.
Watch Video Comment Enlarge font Correct lyrics Print lyrics