[Jay-Z]
Man, they go and tell me like
you never know who your true friends until you ah umm
both got a little bit of money
I mean cause y'all both broke
then there's no strain on the relationship, y'all both broke
And if you got money and he ain't got no paper
He still needs you so you'll never know how he really feel about you
When y'all both get some paper, you'll see

[R. Kelly + (Jay-Z)]
We used to get money together, phone honies together
Pushin chromed out twinkies in custom coach leather
You claim it's all love, but nigga it's whatever
Cause this is business, it ain't personal
Same dream, same team, same schemes (mm)
We even sold to the same damn fiends (how real is dat?)
Ain't no rules in this war for this green
This is business, and it ain't personal

[Jay-Z]
Look, I'm a grown man dog
And I ain't got time to be runnin behind y'all
I know when I first started it was crazy to y'all
"He's gon' start his own label, he'll never be able"
Well, nigga you've been wrong before
And you'll be wrong again if you bet against him
We move through the hood like identical twins
But it just so happen that a nigga made it rappin
You showed your true colors, y'all niggaz stay yappin
That don't stop him, a nigga weigh platinum
Stop through the hood, to say what's happenin? (sup nigga)
Fake hugz (uh-huh) fake whassup
Fake love, fake f*ck, fake thugs
Gotta one myself for your fake shit, I raise up
Hop in my wheels and I peel, streets are blazed up (uh-huh)
About my bid'ness dog, y'all need to stay up - one

[Chorus: R. Kelly]
We used to get money together, phone honies together
Pushin chromed out twinkies in custom coach leather
You claim it's all love, but nigga it's whatever
Cause this is business, it ain't personal Same dream, same team, same schemes
We even sold to the same damn fiends
Ain't no rules in this war for this green
This is business, and it ain't personal

[R. Kelly]
I wish, I wish - that success, we could all
get a piece of it (word) but that ain't real dog (no)
Cause in these streets it's war, the industry much more
But rich or poor, I'ma keep it real my nigga
Invest in chips and watch my money hill get bigger
And do things like, pull up to some clubs
in the skirts with Jigga, and yellin out HEY!
What the f*ck, pop that Cris' my nigga
And then he wants to know how many chips I done sold
Well it ain't y'all business what's behind my doors
But y'all niggaz don't appreciate shit
Helped you out and you still actin like a little bitch
Then you wonder why I put yo' ass in the tenth row
when you asked me for some tickets to my TP-2 show
Lawwwwwwd tell me, why we don't like to see us grow

[Jay-Z]
A-Alike (uh-huh) be alike (that's right)
We don't vibe no more because we don't C/see alike
And your mom got it twisted, she think Hov' changed
Nope; Hov's still here like Rogaine
Ask your boy what he did to the Hov' game
How he jeapordized the whole game
Now when we see each other it's so strange
I don't know whether to hug him or slug him (damn)
I don't know whether to cap him or dap him
I don't know what to think of him, I don't know what's happenin
But what I do know, all the niggaz that you know
locked up doin a few doe, but who knows?
Maybe it wasn't you, maybe I'm buggin too (right)
But I'm scared dog, I don't know what the f*ck to do
Do me a favor, place yourself in my shoes
The game, no exceptions, gotta follow the rules 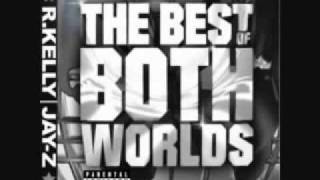