We're on the prowl and our claws are bared
There is no holding back so you'd better beware
My sights are homing in, I feel the power surge
No time for excuses now that I have the urge
Madame and mister listen up and take heed
I was raised in hell and I'm spreading the seed
Breakin' your face and bustin' your head
Won't leave you alone until I leave you dead
We're the restless breed livin' day by day
So get down on your knees 'cause this time you're gonna pay

I'm living my life causing, Warfare!
Reigning king of the night,Warfare!
Take it from the streets, Warfare!
Put it in the sheets, Warfare! Trample the cities leaving dust in our wake
Not a thing left alive, run before it's too late
The women, the children, the young and the old
Nothing will escape the Panzer stronghold
Sound of crushing bones, scent of burning flesh
Posting skulls on a pole terrorizing the rest
We're the restless breed leaving nothin' behind
Can't reason with a man who has death on his mind
Total destruction from the Panzer patrol
Fire and brimstone taking its toll

Black leather lords we're so tall and so proud
Warfare is our battle cry, shout it aloud 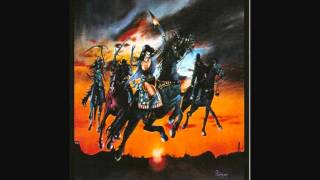