[Verse 1: J. Cole]
Baby girl, I can't imagine what it's like for you
I got you pregnant, now inside there is a life in you
I know you wondering if this is gon' make me think 'bout wifing you
Like if you have my first child, would I spend my whole life with you?
Now I ain't trying to pick a fight with you, I'm trying to talk
Now I ain't trying to spend the night with you, I'm kinda lost, see
I've been giving it some thought lately, and
Frankly I feel like we ain't ready and this...
Hold up now, let me finish!
Think about it baby, me and you we still kids ourselves
How we gonna raise a kid by ourself? handle biz by ourself?
A nigga barely over 20, where the hell we gon' live?
Where am I gon' get that money?
I refuse to bring my boy or my girl in this world
When I ain't got shit to give em
And I'm not with them niggas who be knocking girls up and skate out
So girl you gotta think about how the options weigh out
What's the way out?

[Hook x2: J. Cole]
And I ain't too proud to tell you that I cry sometimes
I cry sometimes, about it
And girl I know it hurt, but
If this world was perfect, then we can make it work
But I doubt it

[Verse 2: J. Cole]
She say nigga "you got some nerve
To come up to me talking about abortion
This my body nigga, so don't think you finna force shit!
See I knew that this is how you act, so typical
Said you love me oh but now you flipping like reciprocals, figures though
Should've known that you was just another nigga
No different from them other niggas who be
Claiming that they love you just to get up in them drawers
Knowing all the right things to say
I let you hit it raw, muthaf*cka!
Now I'm pregnant, you don't wanna get involved muthaf*cka?
Trying to take away a life, is you god muthaf*cka?
I don't think so, this a new life up in my stomach Regardless if I'm your wife, this new life here
I'm a love it, I ain't budging
I just do this by my muthaf*cking self
See, my mama raised me without no muthaf*cking help, from a man
But I still don't understand how you could say that
Did you forget all those conversations
That we had way back about your father? and you told me
That you hate that nigga, talking about he a coward
And you so glad that you ain't that nigga, cause he
Left your mama when she had you and he ain't shit
Now here you go doing the same shit...
You ain't shit nigga! "

[Hook x2: J. Cole]
And I ain't too proud to tell you that I cry sometimes Cry sometimes about it
And boy that shit hurting, and ain't nobody perfect
Still we can make it work
But you doubt it

[Verse 3: J. Cole]
They say everything happens for a reason
And people change like the seasons, then grow
Apart, she wanted him to show his
Heart and say he loved her, he spoke them
Magic words and on the same day he f*cked her
Now she wide open, she put a ring up on his finger
If she could, but he loved her cause the p*ssy good
But she ain't no wife though, uh oh!
She telling him she missed her period like typos
He panicking, froze up like a mannequin
A life grows inside, now he asking "is it even mine? "
What if this bitch ain't even pregnant dog
Could she be lying? and she be crying cause he acting
Distant, like "ever since I told you this, nigga
You acting different". and all his niggas saying
These hoes be trapping niggas. playing with niggas'
Emotions like they some action figures
Swear they get pregnant for collateral
It's like extortion, man
If that bitch really pregnant tell her to get
An abortion... but what about your seed nigga? 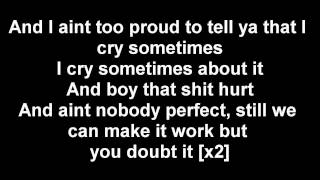