Who's got the stuff that made the Wild West wild?
Who pleases ev'ry woman, man and child?
Who does his best to give the customers a thrill?
-Who?
Colonel Buff'lo Bill

Who's got the show that gets the most applause?
Five hundred Indians and fifty squaws
Ten feature acts and there's the special feature still
-Who?
Colonel Buff'lo Bill

Just when they've taken ev'ryone by force
Who makes an entrance on a big white horse?
Who starts a' shootin' till there's no one left to kill
-Gen'ral Grant?
No! Colonel Buff'lo Bill!

-Certainly this is quite a thrill, better than all the vaudeville
-Let us be on the go and see the show with Buff'lo Bill 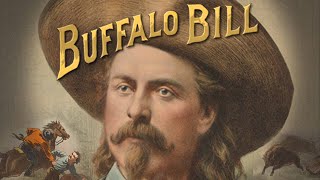