In the year of our Lord, eighteen hundred and six
We set out from the coal quay of Cork
We were sailing away with a cargo of bricks
For the grand City Hall in New York

We'd an elegant craft, she was rigged 'fore and aft
And how the Trade Winds drove her
She had twenty three masts and she stood several blasts
And they called her the Irish Rover

There was Barney Magee from the banks of the Lee
There was Hogan from County Tyrone
There was Johnny McGurk, who was scared stiff of work
And a chap from Westmeath named Mallone

There was Slugger O'Toole, who was drunk as a rule
And fighting Bill Tracey from Dover
And your man, Mick McCann, from the banks of the Bann
Was the skipper on the Irish Rover

We had five million hogs, six million dogs
Seven million barrels of porter
We had eight million sides of old blind horses' hides
In the hold of the Irish Rover 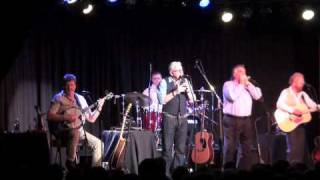 check amazon for The Irish Rover mp3 download
these lyrics are submitted by kaan
these lyrics are last corrected by mxmcor
Songwriter(s): Will Millar
Record Label(s): 1999 Geffen Records
Official lyrics by