Near Banbridge Town in the County Down
One morning last July,
Down a boreen green came a sweet colleen
And she smiled as she passed me by.
She looked so sweet from her two bare feet
To the sheen of her nut brown hair.
Such a winsome elf, I'm ashamed of myself
For to see I was starin' there.

[Chorus:]
From Bantry Bay up to Derry's Quay
From Galway to Dublin Town,
No maid I've seen like the fair colleen
That I met in the County Down.

As she onward sped, sure I scratched my head,
And I looked with a feelin' rare,
And I say's, say's I, to a passer-by,
"Whose the maid with the nut brown hair"?
Well he looked at me and he said to me,
"That's the gem of Ireland's crown.
Young Rosie McCann from the banks of the Bann, She's the star of the County Down".

She'd soft brown eyes with a look so shy
and a smile like a rose in June.
And she sang so sweet what a lovely treat,
as she lilted an Irish tune.
At the Lambuth dance I was in the trance
As she whirled with the lads of the town.
And it broke my heart just to be apart,
From the star of the County Down.

At the Harvest Fair she'll be surely there
So I'll dress in my Sunday clothes,
With my shoes shone bright and my hat cocked right
For a smile from the nut brown rose.
No pipe I'll smoke, no horse I'll yoke
Till my plough was a rust coloured brown.
And a smiling bride, by my own fireside
Sits the star of the County Down. 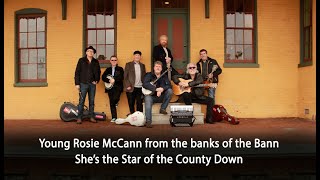