I was sitting alone again,
(in a remote corner lit only by the frail dance of dying candles)
Drinking, of course, when Perdition the Elder sat down.

He had that weird smile upon his face
And that fiery look he has when he's about to initiate a somewhat unusual conversation;

"I am but a Plague..." he began to say,
"I have studied Locustism for years now.
I am like you, y'know. Human, a useless vermin?"

He had a point, but still I felt like I had to reply something... anything,
But he cut me right off;

"...A slight change of posture, a loud muted noise from Above, And then came an Ego that was to be our own downfall..." he paused and stared at me for a moment.

Thats when he suddenly pulled this huge magnum from his jacket
And forced the wretched thing into my mouth, saying;

"I am giving you a choice: Kill yourself or someone you love..."

"The cold sensation of your clenched teetchs around a gun barrel
And the warm salty taste of your own tears... thats my gift to you." 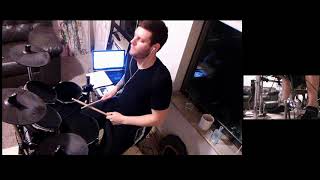 check amazon for Play Dead And I'll Play Along mp3 download
these lyrics are submitted by kaan
browse other artists under I:I2I3