Rest yourself, warmongering nut
I can’t see where you’re coming from
Your reasons make my head hurt
With your false pretence of right and wrong
One god is rich, another stern
All believe right’s on their side
To favour their cause, heaven’s wrath
Spreads genocide, genocide!

Fight them back, we have to fight them back
Though they come with violence, threats and bombs
They’ve poisoned themselves, they’re not so strong
The old ways are wrong and it can’t be long

Life is not a commodity, the power lies with you and me
To fight them brothers and sisters as a family
Fight them with creativity Rockets fly and news reels lie
Refugee camps overflow
In squalor, degradation, slime
People run to flee these crimes
To live like this the only way
They left their homes for good that day
The day the missiles flew to town
The day the gunmen came to stay

Missiles fly and people die
Innocents caught in the crossfire
The normal people of this world
Share the same simple desires
Of food, shelter, happiness
They aren’t ruthless empire-building yobs
With food in our bellies and hope in our hearts
I reject your law and shit your god! 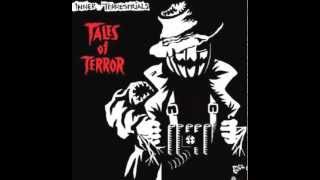