This Is For My Homiez Lyrics

This Is For My Homiez Lyrics

Yeah, come around my way

Come around my way
It's the Big Ill with the Al

(This is for the homies)

So I keep to myself nowadays
Lay back, recline and get paid from my phrase
Sometimes I get caught in a deep thought
As I drink a quart of the cold old dog that I bought

The more I drink, the more I start to think of him
Locked up in the clink, will he sink or swim?
I'm what they call the rap rebel Madball
I'm nice with the dice, watch 'em bounce off the wall

I come to your party, bounce through with my crew
We pouring out some brew for some homies that we knew
I'm searching for my homie but he can't be found
I wanna give him a pound and let him know that he's down

Where the homies?
Creeping through the hood
Where my homies?
Come around my way, aiyo up to no good

Well, it's Big Ill, the Babbling Bum, the bum that's babbling
Don't try to step to this, my fist be traveling
Unravelling, land on the gravel when you fall
Yes, yes, y'all, I travel through the mess hall

Now where my homie, I'm by my lonely
I shoulda listened to what my mama told me
But it's too late, I'm upstate pumping weight 'cause I'm frail What you gonna do when you get out of jail?

Bust a cap, bust a cap, put that ass on the map
Here's a slap in the grill 'cause you tried to front on Ill
And I'm locked down, how the Glock sound?
That's what you get for trying to blow up the spot, clown

That's the ability, load up the artillery
Your body I'll deliver to the river, gee
Remember me with the
(Crooklyn residency)

Now you can take me out of Brooklyn
But you can't take Brooklyn out of me
That's how it be, gee

Raise your forties for the missing homies
For all those good times we had together
This song is for our homies
This is for the homies, yeah

Well, it's the I to the l to the I
Straight out the cell with Al, from the fiery pits of hell
(Aiyo, what's up Big Ill, how you doing?)
Aiyo, what's up Al Skratch, now can we woo-woo-woo?
(Come around my way)

That's what I'm about to do
(Come around my way)
Aiyo, I wanna kick it with your crew
(Now 1-2 in the project halls with the Madballs)
(Everyday all day, on 56 Broadway)

But I'm Big Ill coming straight out the pen
B to the K to the L to the Y to the N, bo
(Let off a round, how that sound?)
(Ain't nothing going down without the Brooklyn and the Uptown) 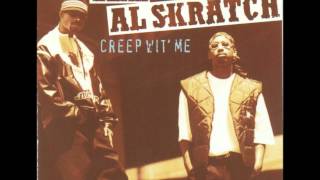