You Scratched My Anchor Lyrics

You Scratched My Anchor Lyrics

So tell me baby, I'm waiting
But you never would confess
Would it make it easier with rope around your neck
So take a breath
(She says she's not a liar)? Cause I've got all the
time it takes
(She's wrong cause I can see inside her)
I wish you could say the same

You're like an angel when you sleep
So go to sleep for good
So tell me if I'm too rough
Close your eyes it's not gonna hurt
Much
For every night that you led me on
Here's another bruise to remind you of
The pain I felt from you
So what's it gonna be
You've got three seconds to speak
Three.. Two.. One 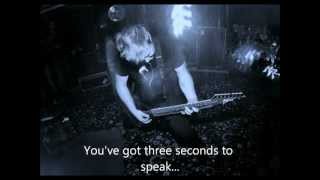