eLyrics I I Set My Friends On Fire Lyrics

Reese's Pieces I Don't Know Who John Cleese Is Lyrics

I SET MY FRIENDS ON FIRE

Reese's Pieces I Don't Know Who John Cleese Is Lyrics


Oh it's a shame that I have to tape over,
Those elysian smiles I thought I'd keep forever.
I remember it all like it was yesterday...
Forget all, Set it down, hit record.
And back away... My intestines are fastening laces,
Intolerable to f*cking untangle.
These vigilant eyes can't keep off the timekeepers.
Second hand every angle.

What's keeping you waiting?
Usually out before I open my eyes.
Why did you pick today?
To epilate between your thighs...

Are you waiting for his tongue to come?
And brush against your cleaned trimmed hair?
I hope he knows, that curvilinear gyrating space,
Won't be the only thing he'll taste down there.
Stop to think about it.
If we've both flooded the same skin...
You've tasted me,
I've tasted you,
Who knows how many places,
My tongue has been?
My tongue has been...

I left, you stayed, I hoped and prayed.
That these nauseating thoughts weren't true.
Before we met, I wouldn't bet,
I would give up nihilism for you!
Nothing ever made sense,
Was I even real?
Took everything wouldn't touch,
And made me feel (hell yeah!)
I had all my faith in you,
That you would never commit and act of deceit,
To wake up in the ante meridian
Knowing there would be solid ground to support my feet.

If it is alright (if it is alright) to conceal the truth,
Then when does the concealment end, and lying begin?
Tell me when? Tell me when? This is a maudlin motion picture.
A theme song in search of a movie,
I've got the perfect script to match this tune.
Who really knows what goes on in the afternoon?
Lets not ruin the surprise.

I don't buy these incredulous denials,
Do you think you've found the exit,
To your escape? I really shouldn't be thinking this way,
It would put my mind at ease,
If I caught your ass on tape.
They'll be no excuses baby.
I'll forward this to your friends and family. Maybe I should reconsider this diagnosis,
Lets think things out before we conclude.
Commonly a virtuoso at these procedures,
But this was the saddest thing my eyes have ever viewed.

The postmeridian hours that we performed,
Seemed like such a perfunctory routine,
But I can obviously tell by the footage here,
That you're in love with his machine!
How could you do this to me?
Next time you won't get out so easily.
Now that I know what I'm up against;
I came prepared.
Bat in hand behind the closest door I painfully stared.
Say "hello" to this bark, in-between your teeth.
Soon you will also be bleeding from underneath.
It took balls to do what you've done.
Having your manhood in your mouth is no fun.
And as for you darling, you're going no where,
It's kind of hard to move when you're tied to a chair.

See there's a twist to this lovely,
For you too see.
What's hiding in your wardrobe
Isn't a shopping spree.

Comes out to stilts supporting the wait of lust,
I always thought you were someone I could always trust.
Now watch this we smacking flesh,
I'm sure you don't even care.
But with your eyelids sown back to your brows.
This leaves you forced to stare.

With a wire wrapped around his neck,
Tightly tied to a tree,
There he stood on the top of the cliff,
With his inanimate life, above the sea.
He drinks his virulent drink.
And sets himself on fire.

Pulls the trigger though the midair;
Misses his head and snaps the wire.
Now choking and strangling in the water,
His body begins to sink.
Not only did that put out the flames.
But he regurgitated his drink.
This wasn't the worse thing that could happen...yes it is.
We're dying slowing again...we're dying
Slowly again?

Stop, rewind, watch them die.
(Oh don't you love to play it back, and watch it all over?) 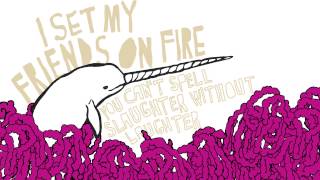 check amazon for Reese's Pieces I Don't Know Who John Cleese Is mp3 download
these lyrics are submitted by cupcakegirl95
browse other artists under I:I2I3
Songwriter(s): Nabil Moo, Matthew Mehana
Publisher(s): I Set My Friends On Fire LLC, Fig Stallion