It Only Takes Two To Rock Lyrics

It Only Takes Two To Rock Lyrics

Should you be three like Rush
Or four like the Pixies
Or five like New Kids on the Block
Come listen, children close to me, you see…
IT ONLY TAKES TWO TO ROCK

Back when the world was new
People crawled out of the sand
They looked around and said
We’ve got to start a rocking band
So they gathered up guitars
Keyboards and horns and basses
What a waste! They never knew
The power of two could melt their faces

Whoa-whoa!
I’ll get right to the point
If you think that two can’t tear up the joint
Then you’re in for a shock
Because it only takes two to rock!

And then one fateful night
When the planets all aligned
The Gods of Rock decreed
That these two souls must be combined
Then the Earth reversed its course
As Matt and Jill joined forces
The moon eclipsed, the seas caught fire
Trust us, dude, we checked our sources

Whoa-whoa!
Now here’s some good advice
If they say “I bet they’re soft and nice”
Take that bet – it’s a lock
Because it only takes two to rock!

BRIDGE
So take a number all you ladies
Come take a ride in our Mercedes
We’ll whip it good (CRACK!) like in the 80s Come on cutie (come on cutie)
Shake that booty (do your duty)
Come on sweetie (come on sweetie)
Sign my treaty! Break it down, Kevin Niemi-style…

JILL: So you see, my friends, it only takes two to rock. That's right, two
People can do all the rocking there is to do. It doesn't take three, or
Four, or some insane Industrial Jazz/P-Funk number...just two. Two is all
You...

MATT: Yes, but in the song, it says we don't need a bunch of guitars and
Drums and basses to rock, but the song does have guitars and drums and a
Bass. And some other sounds too.

JILL. Ah, but are the sounds really there? Or do we rock SO HARD that we
Just make those sounds appear in the minds of the listeners?

MATT: You just blew my mind.

JILL: But of course. That's what we do. Plus, we have Pro Tools. 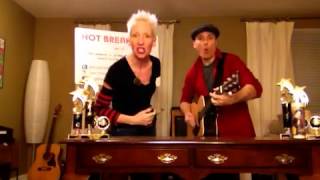 check amazon for It Only Takes Two To Rock mp3 download
these lyrics are submitted by BURKUL4
browse other artists under H:H2H3H4H5