They found me in a florist's,
I was bright and outta focus.
I was kickin it with chemists.
The scratches on my back,
they formed into a choir and belted out a chorus.
There were clicks and hisses and complicated kisses. Gideon’s got a pipe made from a Pringles can.
Hey, Providence—you gotta fall in love with whoever you can.

The sheets stain,
but the sins wash away.
Naked bodies in Narragansett Bay.
The same kooks don’t shoot, but they sure do sniff.
The same kooks can’t fly, cuz their wings are clipped. The same kooks can’t come, but they sure do kiss, makin’ love to the girls with the wrapped-up wrists. The Lord takes away and the Lord delivers—wash it all off in the Mississippi River. We slipped it off in the matinees,
we rip it up just like razor blades.
Now, we just need somethin’ to celebrate.
(I wanna open some bottles up.)
I wanna open some bottles up (I wanna open my body up.)
I’m gettin’ tired of all these Styrofoam coffee cups… 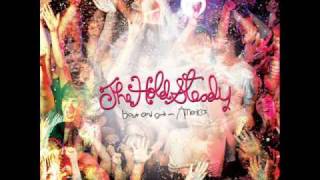