Exiled they were,
Apart from the World,
They chose to live a life of war,
Hate and sin
They found a land,
Desolate and strange,
To satisfy their dark and powerful instincts

And there lightning strikes eternally
And there snow falls endlessly

They kill and slay,
Misanthropic thoughts are guiding them to banish life itself
Their land of chaos is a battlefield,
Where only the strong in mind is victorious

In their eyes burns the flame of rebellion
These warriors only live to crush the ones who hinder them to do what they want
Some lies are still alive,
But the chosen Knights control mayhemic forces to suppress them
This fight is eternal

And under the lowering sky,
The weak enemies try to hide, But when lightning strikes, they soon realize they will die
The spirit of all that is dark always fights with the possessed knights
When blood has been spilled they drink it for their victory

Yonder lightning strikes eternally
Yonder, snow falls endlessly
Mercy: this word makes no sense for them
Their painted faces strike fear into your mind
They like when you’re at the point of death
The knights are the guardians of anti-morality

And the sun never rises here
In this land, love does not exist
They dream Armageddon is near
The reign of Evil is their prophecy

Medieval tunes can always be heard in the air
Tonight, the village is singing the triumph of death again! 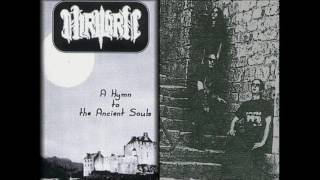