See, I
Don't do this one for you, this one's for mine
And you know people talk up all the time
I know, I know, I know, it's fine
It's all mine
All mine

Yo, don't hold feelings if we don't talk in days
Not like there's any more to say
It could fall off or it could fall in place
I pay attention, I can't afford mistakes
They're shocked I'm here in a tortoise race
They twist their necks when they see me
Girls wanna text me, they need me
It's minor
I don't really care, I'm selfish

Anyway, R and S can't chat to me anyhow
CR0 man know that I get about
Had three jimmies in my wallet when I headed out
Cause I know these hoes get about
See, I'm
Good when they're not
Good where they're not
If they wanna cut me off that's their loss
If they wanna f*ck me off, they're losing

Anyway, moving on
I've gotta do things
I've been on a one man mission right now
I've got a different agenda
I'm not chilling with a different gender
Hardy Season
Hashtag That from Spring to December Now they wanna holla like "wagwarn baby"
True say I've been on a calm one lately
Right now the clock says get that paper
I'll press that later
I ain't gotta clart one lately
Cause they'll still be there when the money comes through in the VIP
Olders say they should've been like me
No Biggie, imma hit it when I'm B-I-G
Right now I wanna make that paper work
Then get an A5 when it's L-E-G-I-T
This minute it's '08 plates
Tints on the glass so I know it ain't bait
I'm still with my nigga that I had around me since £5 beanies
I get bored and I might shout "beanies!"
Freak of the week
Me on the beat, that sounds like a beanie

CR0 where the mandem sho
Too clean so we never bang them hoes
Too busy tryna bang that job
Still I've gotta blank that thot
I'm busy, tryna grab them notes
If I could, then I would try stash them both
No time for a slut
I want real money
Who's grindin enough? Like them niggas and spliff
I'm tryna grind till I buss'

CR0 sides where the mandem are lazy
Half of them man wanna bang for a lady
Some of the niggas put their hands on a baby
Tyga and Kylie
That's not H-A-R-dy, nigga
That can't be Hardy
Won't see me in a party
I've got too many bangers on deck
Don't start me
Hardy Season
Hashtag nasty

See, I
Don't do this one for you, this one's for mine
And you know people talk up all the time
I know, I know, I know, it's fine
It's all mine
All mine 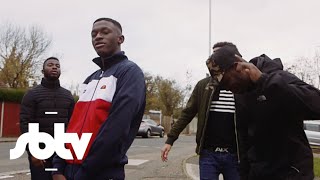