He lived right acroos the street, it was on the news for the world to see. They caught with his hands on a neighbors child. Now he said he never done it before has he cried before the judge in court. So they put him away for a just a little while. Morning found him in his cell somebody sent him straight to hell. Down on his knees begging for his life. Sounds like justice to me.
Mom and Pops had a corner store it had been there 30 years or more and it had been robbed about a hundred times. Punk walked in like he owned the place said give me the money as he slapped his face. he didn't know Pops had a .45. Dude never made it to the door. Pops said I learned in the Army how to point and squeeze.
And it sounds like justice to me . Sounds like justice, justice. Justice 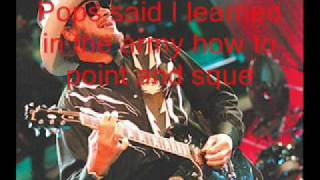