[Verse 1: Gucci Mane]
It just can't be what it can't be 'cause it simply what I say it is (Say it is)
Busted out the vacuum seal, you can smell this shit in Fayetteville (Smell in Fayetteville)
Black Jaguar, no Jacksonville, I don't even know what year it is (Nope)
He didn't guard his taco, now his ground beef on his steering wheel (Brrt)
Coachin', now my niggas ballin', you can't peep what play it is (Ball)
They're so full of dope, they probably don't even know what day it is (No, no)
I rocked the middleman, he probably don't even know who year it is
Judgin' on my prize, I told Big Five, "This ain't no fire drill"
Ballin' like the Final Four, got more devils than Duke and thеm (Duke)
Ain't no mean muggin' or shoulder shruggin', see I'm shootin' thеm (Shoot)
Nigga took down one of my guys, so I want at least two of them (Two)
It's a lot of niggas still play both sides (Ayy, ayy), that's why Gucci through with them (Let's go)

[Verse 2: Pooh Shiesty]
Ayy, them 7.62s shoot at him (Boom)
Don't play with Wop while Pooh with him (Ho)
Fox 13, we rep that murder gang, just ask or Google them (What?)
Don't talk to me about your opps unless you came from shootin' at them (Ho)
I'm clutchin' my bump stock in the drop top, we bumpin' who-is-him
Pop a Perc', now I'm geeked up, guess this how them nerves feel
Pass my nigga a new choppa, let's work on your third kill (Fool)
Before we pull off, circle the block, see how far my serve is (Skrrt)
It's six K for a pint of Wock' if you want your syrup with the seal
That's for sure, keep that Draco in my lap, scream, "TTB", we trained to blow (Boom, boom, boom, boom, boom)
New Cartier head with the Cuban link, had to switch out the rope (Ice, ice, ice, ice, ice)
Five hundred shots up in this bitch, if you play, we gon' do the most (Ho)
Two baby choppas hid in my coat, bitch, I'm havin' power like Ghost (Who?)

[Verse 3: BIG30]
AK with the machete, so we gon' open up your belly button (Uh)
No, you did not catch the body, why you wanna take credit for it? (Huh?)
All my niggas Choppa Gang, but different sets like Teletubbies
Nothin' but convicts in this studio, I'm with my felon buddies (Well, damn) Throw back Percocets and pour up Wock', we call that powered up (Go)
Put four holes up in that big boy's back, call him an Audi truck
Get shot up in your face for cursin', nigga, better not shout at us
Better know who you chasin', dare talkin' 'bout you comin' after us
They say, "30, you done lost it, poured up in the water bottle" (Lean)
Strapped up with a Judge on me, I got the biggest revolver (Ho)
Heard my new opp was a problem, popped out with that problem-solver
I got killers on payroll and they gon' kill you 'bout they dollar (Ayy)

[Verse 4: Foogiano]
Nigga ever play with us, we gon' get active, handle that (We hound up them)
I send Scarr deep on the fly, BIG30 bleed, he get the sack (Go, let's go)
Pooh let the whole hundred go, so I call him Wilt Chamberlain (Brrt)
I throw this bomb just like Brady, Big Wop like Bill Belichick (Belichick)
Twenty in this FN, it shoot like Durant, my arms extended
Don't start no conversation 'bout me 'cause, boy, your life will end (Don't do no arguin')
I would never play with no man, I shoot first, ask questions later (Brrt)
Diamonds on me, frozen nigga, why you think they call me glacier? (Ice, ice)
I smoke Backwoods back to back, I get high like I'm Snoop or somethin' (Just like I'm Snoop or somethin')
Mama said I need to stop, pretty soon, I'ma need a lung
It's the new 1017, we bangin' like N.W.A. (Brrt)
I f*ck hoes like Eazy-E, I got the curve without the AIDS (Without the A)
It's the way that I was raised, you break the rules, I gotta spill (Gotta show you)
Tool's the ten commandments, we add one, eleven, do 'em in (Brrt)
I know your ho wanna f*ck because she see these Cuban links (I know she see this ice)
When I stuff your throat with dick, you better look at me, don't blink (Bitch, you better not blink)
Nigga, when you hear about it, don't come ask me, ask your ho (Ask your ho)
Bitch, it's Gutta Gang and I get gutta, you know I bang fours (You know we throwin' fours)
When it come to gettin' money, they know that I get aggressive
Think about dissin' me, think again, boy, might as well get the stretcher (Brrt) 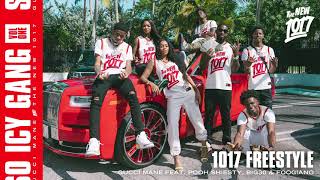