Put Out The Fire Lyrics

Put Out The Fire Lyrics


John the Baptist at the Jordan preached the coming of the Lord
Baptizing everyone who would believe
Among the crowd that gathered, they're a watching from the shore
I'd imagine there were scribes and Pharisees
I can see John pointing toward Jerusalem that day, to the place of temple sacrifice
Saying through the years those lambs have never washed our sins away
But hope is here, behold the Lamb of God

The smoke up at the temple sent a message to the world, that every sin of man would have a price
Daily as the priest prepared an offering for the Lord, the purist of all lambs would have to die But when John saw the promise walking down ol' Jordan's banks
The answer to the cries of all the lost
He knew up at the temple, things were soon about the change, the altar would forever be the cross 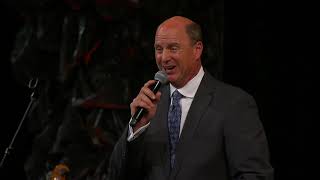 check amazon for Put Out The Fire mp3 download
these lyrics are submitted by mxm4
browse other artists under G:G2G3G4G5
Songwriter(s): rodney griffin
Record Label(s): 2015 Daywind Records
Official lyrics by