Beware, four figures appear through the fog
Yeah, Gravediggaz cut like swords
Fear makes ya brain go numb
You ain't got a clue where the Gods come from

I sold myself to exist an' then I flittle
With millions of sperm cells an' I found the egg
Know, I got my chance
I came to enhance, represent an' get open as a bank

Pass it, a deep theourassic
Gravediggaz are massive, puttin' niggaz in caskets
Blowin' like the wind, when I'm in my spin
Ya got f*cked cross the path of the twister

You face the storm an' bring it on
An' get chopped in the blocks from Hitchcock
The birds, my mental ward is my brainstorm
Somehow I flipped an' came equipped with a chainsaw

Diggin' graves see, pays my rent for the day
Some hate the image that I must portray
Critics, say, "Go to hell", I go, "Yeah
Stupid motherf*cker, I'm already there"

Frustrated, mentally aggravated
To be the rebel that society created
I'm good most times but when I'm foul then I'm flagrant
Livin' in the shadows like a government agent

Path, we creatin'
Splittin' G's, choppin' necks with the fat guillotines
I'm your nightmare, fright with verse
One verse will put your ass in my black hearse

Ryzarector, danger, enter the graveyard chamber
It's like someone diggin' in yer ear with a hanger
I inject my poison stinger into your finger
Of all your life forces, I'll take ya

I'm bloodthirsty, thirsty for sure
About to bust up the same ones who bust up the poor
You're not safe anymore
To all the holy spooks, I declare war

People fear what they don't understand
So, this is why we're here
To explain that there's nothin' to be afraid of
They have no fear, Gravediggaz are here
Explain lyrics
Correct lyrics 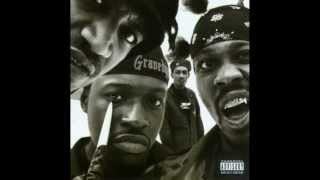