The Crossing (ooh The Action...) Lyrics

The Crossing (ooh The Action...) Lyrics

Jean-Paul Goude: "There was nothing that indicated that
Grace could be a star except her deep conviction."

Jones
Miss Grace Jones Grace Jones: "I think that too much vanity in a man
irritates me, and in a woman, oh God..."

Paul Morley: "What things make you blush?"
Grace Jones: "Being adored and worshipped, one of the
things that makes me blush."

Jean-Paul Goude: "Grace really has this thing in the
back of her head. She really lets herself carry and
when it feels good she just fits into things. She
doesn't analyze too much."

"I first met Grace at the Russian Tea Room in New York.
That was about 1978. She was like the disco queen of
that period." 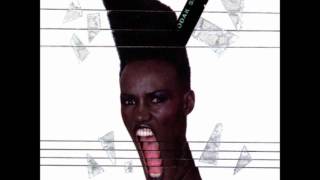