[Eggsy]
Minimoto, try to catch me
Photo evidence too blurred to match me
Scaled down, my mini superbike
Or petrol driven quad takes me places I like
Like booze you can have it off licence
Some make a sound like souped-up Dysons
Me so horny, me love you long time
Ride it at nights you might get a fine
Burnouts, endos, doughnuts
It might be small but it's ridden by grown-ups
Like Maradona with the Hand Of God
Cruising up Bristol with my mates in a quad
Put the pedal to the medal from stop to go
If I get caught then I've breached my ASBO
Got banned from the centre of town
Night falls, so I burn your house down

[Adam]
It's got 2 wheels that go like 4
I haven't got a licence, I don't like the law
Minimoto, it's road legal
My Missus on the back, puffin' on a Regal
You don't like it stop complaining
I'm the one whose getting wet when it's raining
Chuck it in the back of my Capri
Smoke a fat bong, drive round the Forest Green

[Eggsy]
2 wheels, 1 pair of Nike
Like Richard Hammond when I get on the mic
1 kid, 1 hooded top
Smack yer arse when I drive by the bus stop

[Adam]
Minimoto, with a bodykit
I squat on it like a need a shit
I'm on the streets, where the birds are bitter
I'm like Easy Rider but a bit shitter

[Mike Balls]
I ain't got a helmet, don't need a test
I can drive a minimoto like a man possessed
I can drive it on the pavement or even in a field
I smashed it up twice but the scars have healed Taking a risk by cutting up 2 cars
Front brakes locked up, went over the handlebars
I ain't got a Harley, I ain't got a Honda
I got a minibike and I drive it up the Rhonda

[Billy Webb]
With your knees at your chin the fun begins
Your final warning it could end up in a dustbin
It might be exciting when you pull off a stunt
But it's a 3 years olds toy that makes you look really
stupid...

[Eggsy]
Some come from China, some Japan
I buy it on the net or in Cwmbran
It don't cost much, round 90 quid
And I won't get caught cause I keeps it hid

[2 Hats]
I got a minimoto cause I seen in a photo
Ozzie Osbournes got one and he's going f*ckin' loco
He went and done a wheelie on a whim
Went too far, and broke a limb
Jumping over stuff like Evil Kineavil
I've had more crashes than Eddie The Eagle
Like Kickstart but you don't get a prize
Cause your hundred thousand times more likely to dies

[Eggsy]
Open road, vanishing point
It feels much faster if you smokes a joint

[Billy Webb]
Mission aborted, gone for a smoke
Tried to run on a chip but the engine broke (?)

[Eggsy]
Don't stop me now cause I'm having a good time
Got pulled over, was expecting a fine
But in court to my dismay
Minimoto got crushed, the same day
It was smashed up in a cube when they gave it me back
And I sold it on for 50 quid for scrap
Then I went home and went online
I bought another one for £49.99 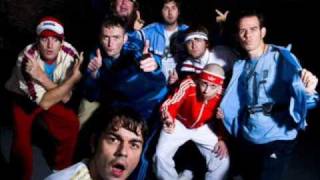 check amazon for Minimoto mp3 download
these lyrics are submitted by kaan
browse other artists under G:G2G3G4G5